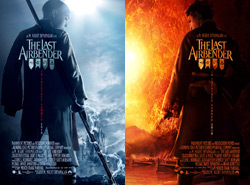 Cast Page – Learn who is in the movie in each of the major roles.

Behind the Scenes – Learn about the movie from the creative team and the cast that put it together!

Trailers – Watch previews for the movie and enjoy!

M. Night’s Live-Action Film based on the Nickelodeon Animated Series

M. Night Shyamalan will battle the elements when he tackles “Avatar: The Last Airbender,” a live-action big-screen adaptation of the popular Nickelodeon animated series, for Paramount Pictures’ MTV Films and Nick Movies.

Shyamalan will write, direct and produce the adaptation, which Nick hopes will turn into a three-picture series with Shyamalan’s continuing involvement. The project marks the first time that Shyamalan, who is known for crafting original screenplays, will direct material he didn’t create. It also is a rare foray for him into the kids pic arena, though he did flirt with directing one of the “Harry Potter” movies and did co-write 1999’s “Stuart Little.”

Created by Michael DiMartino and Bryan Konietzko, “Avatar” is set in a world balanced on four nations — Water, Earth, Fire and Air. In each society, there are masters who can manipulate their native elements — Waterbenders, Earthbenders, Firebenders and Airbenders — while the one person who can master all four is the Avatar.

When the current Avatar, a 12-year-old boy still learning to master his powers, seemingly dies, the Fire nation launches a war for global domination. One hundred years later, two teens discover and free the Avatar and his flying bison from suspended animation, and he must fight to restore harmony among the four nations.

Scott Aversano, head of MTV Films and Nick Movies, is overseeing the project. Shyamalan, repped by CAA, last directed “Lady in the Water.”

Because James Cameron also is about to film a new project titled “Avatar,” the films could end up in a showdown over their titles. Cameron’s camp said he began his “Avatar” screenplay 12 years ago. “Ours is registered with the MPAA,” Cameron’s Lightstorm Entertainment partner Jon Landau said.

A Nick spokesperson said it also has registered its title with the MPAA.

This site uses Akismet to reduce spam. Learn how your comment data is processed.