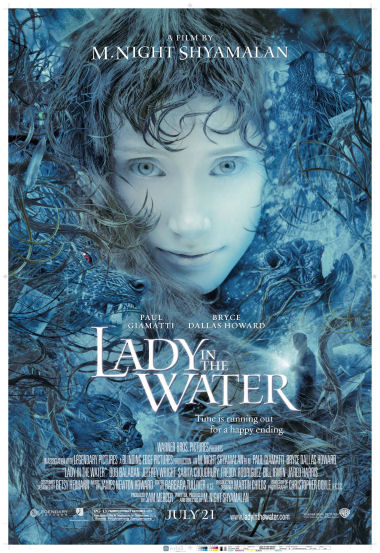 The movie centers on the superintendent of an apartment building who finds a rare type of sea nymph swimming in the apartment pool.

Production began in August on location in Philadelphia, for a release in July 2006. It was completed in late October.

Shyamalan’s last four films – The Sixth Sense, Unbreakable, Signs and The Village – were distributed by Disney. The studio and Shyamalan discussed “Lady,” but the two decided mutually to part ways on the project, which will be released by Warner Bros.

Lady in the Water will be distributed worldwide by Warner Bros. Pictures, a Warner Bros. Entertainment Company.

Cleveland Heep: I’m sorry I couldn’t protect you. Oh, I should have been there, I am always going to regret… just not being there. I miss your faces. They remind me of God. I’m so lost without you guys. I met this very nice lady, and her name’s Story. I think you would have liked her. I think she might be… an Angel, because she has to go home. I love you all, I love you all so much.

REVIEW: Lady in the Water is a film of wonder, showcasing the amazing mind of M. Night Shyamalan. It takes you into a tapestry of wonder, and like all of his films, the pieces can be wound in many different ways. Read More »

For more pictures please visit our Lady in the Water Gallery.
Icons