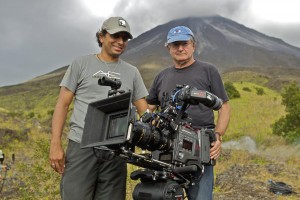 M. Night Shyamalan has traditionally shot all of his movies on film. After Earth was shot digitally with Sony’s F65, a camera with an 8K image sensor.

Shyamalan spoke with Collider about the decision to shoot digitally this time, and what that means for the rest of his career.

Collider.com: I’m curious about what camera you decided to use on the film and why?

Shyamalan:  Well you know this is my first movie I shot not film.  I always thought I was going to be the film guy until I died.  I kind of tested – the cinematographer Peter Suschitzky, he had me do tests on all the digital cameras with the film camera and see which one would look best in the forests and jungles where we were shooting, and I just fell in love with this camera.  It’s called the Sony F65, and ironically I made the film for Sony, so you can imagine how happy they were, but that really had nothing to do with the decision.  It was a brand new camera; in fact we used it for the very first time.  In know Oblivion also used it, but we shot with it first.  I used camera “001”, which was an amazing thing.  Obviously our technicians and camera people were a little nervous in the jungle with the very first camera being made.  It’s a wonderful camera that captures colors, such pungent colors.  I love colors and actually I hired Peter Suschitzky for his use of colors on this film.  He really made the golds in the cockpit, and the greens obviously in the jungle, and the subtleties of their world on Nova Prime – how to get all the richness of those colors out. Its super sharp in a good way, like film.  You know what it is?  Its sharpness reminded me most of film.  It didn’t go into a place where it became too slick.  It had a film warmth to it, whereas normally I find a lot of the digital cameras have a little coldness to them, a little silvery grey quality.

Collider.com: For me what I’ve noticed is it’s not so much about the digital camera it’s about where you’re watching it being projected, because I’ve seen some really [bad] digital projection.

Collider.com: Because the Alexa and the Epic – and honestly the Sony F65 is an amazing camera.  The look of your film and the look of Oblivion are both really fantastic.

Shyamalan: Oh great, I’m a huge fan of it, I really am.  It’s funny because I don’t know if I’m being biased but I always find the Alexa and some of the other digital cameras have a baseline of coldness.  It’s a slightly baseline and if that’s your style then it’s perfect.  The cooler colors, if that’s your baseline you’re in heaven.  Fincher, obviously, that’s his baseline so digital cameras will be perfect for him.

Shyamalan:  Yeah, you don’t often try to redefine the whole movie in post.  You don’t really try to recreate it.  The really interesting thing with digital was Peter was actually color timing it on the set, so when I was watching it on the monitor it was color timed already.  So I’m really getting a perfect view of it.  And I’m saying hey, “Can we make the key light stronger?  Can we have more of a sense of progression from the previous scene that we’re at the end of the day?  How can we convey the characters isolation a little more with accurate lighting?”  Things like that, you can actually be confident that you’re tweaking the real image there, which is fascinating.

Collider.com: So does this mean that you’ve fully converted to digital?

Shyamalan:  I don’t know, because I’m writing a new one and I’m like, “Huh, maybe the film camera is better for this one.”  So I’m not quite on the train forever.

Collider.com: A lot of the houses that develop film are shutting down, so I think it really is just a matter of time before a lot of filmmakers are going to sort of be forced.

Shyamalan:  I know, it’s sad.  I wish it wasn’t that way.  I wish there were always options so we can decide which is the best style for our film.

Collider.com: Michael Bay is using this brand new IMAX digital 3D camera for Transformers 4, it’s like their new thing so you can get IMAX resolution but the camera’s really small.  Have you thought about shooting with IMAX cameras on any of your previous films?

Shyamalan: Yeah, on this particularly movie I had thought about it a lot, about whether to shoot IMAX.  At the time I had made a decision that it was a little too tricky for me in the jungles where we were with a child to do the kind of setups that are necessary.  So if they have a new technology I can see  one day it becoming a wonderful choice.  I think it would have been really interesting for After Earth.

// THE FOLLOWING WAS AN APRIL FOOLS JOKE// Touchstone Pictures announced recently that director M. Night Shyamalan plans on releasing a “Director’s Cut” edition of his 2004 thriller “The Village.” The DVD is planned for […]

THE NIGHT CHRONICLES, supernatural thriller ‘Devil’ directed by John Erick Dowdle, written for screen by Brian Nelson and a story from the mind of M.Night Shyamalan is heading on its way to DVD/Blu-ray on December. […]