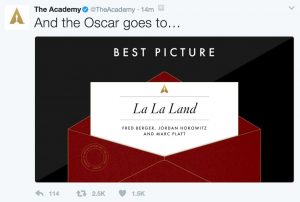 After La La Land won the Academy Award for Best Picture of 2016, a twist that we’ve never seen before occurred. It turned out that the wrong film was announced as the winner of Best Picture of the Year.

Taking credit for it is one of our favorite directors, Mr. M. Night Shyamalan.

I wrote the ending of the academy awards 2017. @jimmykimmel we really got them!

Read more about the Academy Awards at their website.