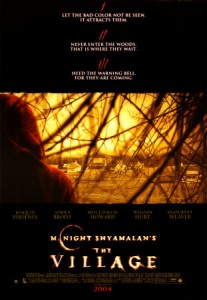 It’s been a long time since The Village was released on DVD. It’s a marvel of a film, with excellent characters, a fully realized world, and huge stars as they were just starting to get into their careers, such as Bryce Dallas Howard. It also features some actors that are huge in the world to this day, like Sigourney Weaver.

With the success of Split, perhaps it’s time that Buena Vista does the right thing, and releases The Village on Blu-ray. We’ve waited long enough. Blu-ray is already starting to be replaced by two things: digital, for those that don’t really care about the sound and picture quality (seriously), and even better quality Ultra HD (or UHD) discs.

We’d love to be able to watch The Village in high definition and we’re willing to buy it.

A release of The Village would be a great show of support, at a time when we are closer than ever to getting a sequel to Unbreakable; a film which Buena Vista would undoubtedly be a part of.

The Village is a story about a community of people that have run away from their fears and pains, into the arms of love, only to find that they may have simply run into more pain while leading by fear. The film is a very appropriate one for the era in which we are living now.

The score, by James Newton Howard, with violins by Hillary Hahn is one of the main reasons I go back to watch this film again and again.

And then there is this:

Ivy Walker: When we are married, will you dance with me? I find dancing very agreeable. Why can you not say what is in your head?
Lucius Hunt: Why can you not stop saying what is in yours? Why must you lead, when I want to lead? If I want to dance I will ask you to dance. If I want to speak I will open my mouth and speak. Everyone is forever plaguing me to speak further. Why? What good is it to tell you you are in my every thought from the time I wake? What good can come from my saying that I sometimes cannot think clearly or do my work properly? What gain can rise of my telling you the only time I feel fear as others do is when I think of you in harm? That is why I am on this porch, Ivy Walker. I fear for your safety before all others. And yes, I will dance with you on our wedding night.

October 4, 2015 Rohan M. Night Shyamalan, Signs, The Village, The Visit Comments Off on James McAvoy to Join Shyamalan’s Next Thriller

Joaquin Phoenix is out, but James McAvoy is in. It still is a good news, although, having Phoenix in a Shyamalan film once again would be a treat for us all. McAvoy is a good […]

If you’re a fan of the music in The Village, you’ll probably recognize her name.  She was the violinist on the score.  Here is an excerpt from an article about her: She has few complaints […]

One of those Shyamalan films that has an ending that was a huge surprise… one that was unfortunately spoiled for me before I got the chance to see it. I can only imagine what it […]