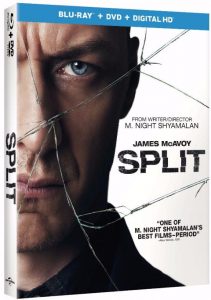 One of those Shyamalan films that has an ending that was a huge surprise… one that was unfortunately spoiled for me before I got the chance to see it. I can only imagine what it would have been like to experience the twist at the end of this movie without knowing that it was coming (or having some idea that it was). Thanks, internet…

That said, here are the details about the upcoming release of Split on Blu-ray and Digital:

Press Release: Universal City, California, March 1, 2017 – Writer and Director M. Night Shyamalan (The Sixth Sense, Unbreakable, The Visit) delivers his most gripping film yet with SPLIT, an original psychological thriller available on Digital HD on April 4, 2017 and on Blu-ray™, DVD and On Demand on April 18, 2017, from Universal Pictures Home Entertainment. Jason Blum (Insidious, Ouija, The Visit, The Purge series) returns to collaborate with Shyamalan in the box-office hit, starring James McAvoy (X-Men: Apocalypse, Victor Frankenstein). The frightening thriller SPLIT delves into the mysterious depths of one man’s fractured mind as a terror unlike the world has seen prepares to be unleashed. SPLIT offers viewers a closer look at the movie fans are raving about with a never-before-seen alternate ending, deleted scenes, character spotlight, and a behind-the-scenes look at the making of the film.

Heralded as “one of his best films – period” (Alex Welch, IGN), M. Night Shyamalan returns to the screen with SPLIT. Kevin Crumb’s (McAvoy) fractured mind has revealed 23 personalities, but one remains dangerously submerged, set to materialize and dominate the others. McAvoy delivers “the role of his career” (Peter Debruge, Variety) as Kevin reaches a war for dominance among all those that rage within him, threatening his stability and impacting the survival of everyone around him.

The Blu-ray™ Combo Pack includes a Blu-ray™, DVD and Digital HD with UltraViolet™.

While Night is busy editing Glass, Universal Pictures is getting the film ready to get some publicity at the San Diego Comic-Con next month before the film’s marketing formally begins in about few months. Like […]

Early this year we shared analysis on The Village and The Sixth Sense (here) written by Mr. Dag Sødtholt, a Norwegian film critic, revealing an attention to the detail and reverence for cinema, and work […]

Opening over $100M worldwide last week during holiday weekend, ‘Glass’ is set to bring in another $16M this weekend just domestically, meaning its overall earnings will be at $70M by the end of this Sunday. […]