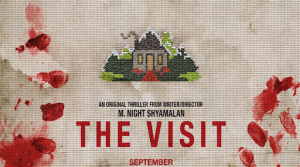 Our champion filmmaker, M. Night Shyamalan is back with a fresh look at the suspense and thrill — this time, he dives deep, making us all go in-depth, to see what ‘forgiveness’ means. The Visit, on its surface, is a tale of siblings, a brother and sister, visiting their grandparents, and how the grandparents slowly lose control of themselves, their inner feelings, most importantly, most terrifyingly the sense of their love towards the children. However, like every Shyamalan film, The Visit, has a onus on its 5 million budget, that is to learn how to make changes in one’s life. This time, we must learn how to forgive and why.

The thrill, suspense, the balance between these two aspects of the film, is well-balanced; only a master of suspense like Shyamalan can achieve such artistic execution, poetic at times, yes, you can say that as well. The Visit, is not a horror film — I think it’s a sin to walk into an auditorium in order to watch a classic Shyamalan film with your mind and heart believing that it is a horror picture. The film’s been promoted as horror, however, it is at all not. Shyamalan, as he has said it himself, recently in an interview, sitting next to his producer, Jason Blum, making it clear, that he doesn’t make horror films. To look at the filmography of the man, Shyamalan, we have to sit in agreement with him, he does not at all sing the hymn of horror — Shyamalan rather makes effective thrillers.

The Visit, is the true classic Shyamalan film that only Shyamalan can proffer. No one can be Shyamalan just as no one can be Quentin Tarantino. As a filmmaker, Shyamalan’s accent differs than others — he eschews the cheap thrills and scare tactics that we so all the time witness in other films, posed all as horror. The true sense of horror can be felt when a film, its nature, twisted turns in its plot, the conflict that the characters are in, makes the viewers never forget the film. The horror, such style is long dead, thanks to the butchering by school-boy attempts of some of the filmmakers. Now, what’s essential is to comprehend the horror as a sense and that sense is pretty much intact in a Shyamalan picture.

What’s also important to take note is on the camera angles and almost all of the shots. Despite being a found-footage film, The Visit, tricks the point of view of one — forgetting so quickly that it’s a found-footage. A camera is being controlled by one of the characters. Aside from the scenes captured interior, inside the house, shots of the sky, snow, bare trees, frozen boughs, woods, and the utter silence, all interpret the film, the taste of the filmmaker, as poetic. At the end of the day, The Visit can be deemed as a pure arthouse picture by one of the best filmmakers we have today.

When Night was on the CBS Early Show today, he spoke about how he wanted to try to do thrillers between each of the Airbender films.  Over the course of that discussion, however, he mentioned […]

August 27, 2015 Rohan M. Night Shyamalan, Signs, The Village, The Visit Comments Off on Joaquin Phoenix & Shyamalan To Team Up Again!

Just as we are getting ready for ‘The Visit,’ which is set to release on September 11, we get the news that Joaquin Phoenix is maybe signing a deal to return back to Shyamalan’s camp. […]