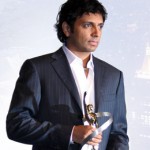 Teddy from Last Airbender Fans got to sit down for a roundtable discussion with M. Night Shyamalan.  The hour long discussion shows Night’s knowledge of the Last Airbender series, as well as his plans for the three movie arc pretty clearly.  Here’s an excerpt.

As someone who has typically created your own stories, was it difficult to write this even though you were a big fan of the series? What was that like?

Liberating. The problem with being auteur-ish is you struggle so much to hold on to your vision. That’s a great thing and it’s a bad thing. You can’t see it from a perspective, and be able to judge it honestly. Maybe I wouldn’t be able to have a conversation about the tonality because I’m so “it has to be this way.”  I love the show and I love almost everything in the series, so I know why I would put it in, but I have the perspective to say “okay, by pulling out one line here it becomes more meaningful.”  So I think it’s been a good thing. I really enjoy working on the movie, which is the main thing. I think you’ll feel that. It’s not work to me, analyzing it and getting the balance right.

That’s the other thing, the Miyazaki influence of the show. Do you guys know who Miyazaki is? He’s like my god. He’s Michael Jordan to me. I met him last year, and luckily for me he hasn’t seen any of my movies. We had a translator. He had his apron on, and he was still finishing Ponyo. He was still animating and came back down, and I was like “ man this is the greatest.”  Mike and Bryan were so influenced by Miyazaki and I’m so influenced by Miyazaki – it’s just an honor. Trying to reach that sort of tonality to an American audience. That water doesn’t just mean water, it has meaning and something behind it. It’s metaphorical. I think in different cultures it is easier to accept that.

When my movies go around the world, like in Spain, right away they’ll just take it and anywhere I want to go with spirituality and that stuff. The same with Japan. And then other countries and other places, it’s much more: “I’m not getting this.”  United States and UK fall into a brother/sister category in that reaction. I know when I come up with an idea that’s more spiritually oriented that these are the territories I have to be more aware of. The Last Airbender is a spiritual movie. There’s no way around it. I mean, it’s badass – it’s really cool, but it’s so meaningful in so many ways. Making sure that comes through is something that really motivates me. So there’s a lot of things that really excite me and make me want to be like the guardian angel of the movie. I feel very protective of it. There’s a great connective tissue. The way I feel as a parent to my other movies, I feel that way as well with this movie.

Do you think the experience opens you up to directing other people scripts in the future?

Yea, my family would not back me on this statement, but I am open to that. I am always writing. I’m writing a new movie now. I’m writing a thriller for me to do and I just have a bunch of ideas. What often happens is I’ll get offered a movie, but I get offered a movie that needs a lot of work. They’ll say come in and rewrite the whole thing and then go direct it. And I’m like, if I’m gonna do all that, I’ll just do this one that’s in my head.

I’m waiting for like it happened with Airbender, and it’ll happen again. I almost did Life of Pi, and that was more timing than anything. I really loved that book, and I thought I could really do a good job with it. So, I almost did that. If I had been offered Jurassic Park, I would’ve done that, but that went to that other guy (laughs). Nothing would please me more for someone to go: “Here’s a source material; a book that you’re going to connect with in way that’s going to say ‘don’t do the next movie of yours.’”  Basically that’s what you’re saying. “Don’t do the movie you have in your head, spend the next two years on this movie.”  And that can definitely happen. I’ve fallen in love with so many books, and I’ve fallen in love with a TV show – unexpectedly. The more wishful thing is that they hand me a screenplay that is like “oh man, that’s unbelievable” go make that. And I’ll be like “Damn, I can go make this movie in like a few months? This is fantastic!”

You can read the full interview at Last Airbender Fans!

Los Angeles Times/Entertainment/24 Frames published an article a week ago regarding M.Night Shyamalan’s new protege. filmmaker Daniel Stamm. Weeks back it was announced that Shyamalan has considered Mr. Stamm to helm his next supernatural thriller […]

Kennedy and Marshall re-team with Shyamalan for The Last Airbender

Kathleen Kennedy and Frank Marshall, who worked with Shyamalan on his blockbusters The Sixth Sense and Signs, will join M. Night Shyamalan, Sam Mercer and Scott Aversano as producers for The Last Airbender. Kennedy and […]

After Earth is officially wrapped

Well, it seems like there was a bit of a twist on my reporting regarding the shoot in Moab, Utah. I was under the impression that the shoot was going to begin during the second […]