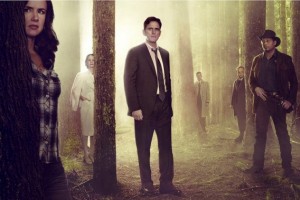 Blake Crouch’s Wayward Pines trilogy is a breathlessly paced, endlessly twisty series of captivating novels that practically demands incessant page turning. Strong characterizations, nail-biting suspense, and shocking cliffhangers add up to some of the most exciting and entertaining pulp storytelling on bookshelves today. Fox’s series Wayward Pines adapts the novel faithfully to the screen, making only minor changes in its adaptation.

Sent to Wayward Pines, Idaho, to investigate the disappearance of two of his colleagues, special agent Ethan Burke is involved in a terrible car accident upon arrival. When he regains consciousness in a hospital, no one seems to know where his wallet, cell phone, or briefcase are, or even believe him when he says who he is and what he’s doing there. The townspeople exhibit some extremely bizarre behavior, and when Ethan finds the mutilated corpse of one of the agents he is looking for, he attempts to flee the town in an act of desperation. But even that isn’t as simple as it seems, as a large electric fence has been erected around the town. Burke’s search for answers in Wayward Pines simply yield more questions.

Director M. Night Shyamalan, famous for the runaway hit ghost story The Sixth Sense and his love for twist endings, will be serving as executive producer. Having routinely turned down working in television for many years, preferring to focus on his career in film, Shyamalan read the first novel in Crouch’s trilogy at the urging of an executive in his office. Being a David Lynch fan, he was struck by the similarity to Lynch’s iconic mystery series Twin Peaks, as well as the intensity of the pacing and atmosphere.

Shyamalan also directed the pilot episode. It’s clear from watching it that the material is a perfect fit for his talents, and he seems liberated by directing someone else’s screenplay for the first time. Forced perspective, creeping tracking shots, and foggy outdoor settings with plenty of shadows are all hallmarks of the director’s style, and they serve the story well. Shyamalan also draws convincing performances from an excellent cast, and the pilot has Burke going up against a gallery of strange and sinister characters. Here we have Melissa Leo as Pam, the malevolent hospital nurse, Toby Jones as her boss Dr. Jenkins, Terrence Howard as the curiously unhelpful Sheriff Pope, Juliette Lewis as the mysterious bartender Beverly, Shannyn Sossamon as Burke’s wife, frantically trying to locate him, and Carla Gugino as the other partner Burke is looking for, who just happens to be an old flame. Tying everything together is the veteran actor Matt Dillon as the confused and frustrated Ethan Burke.

Early reviews of the pilot episode (which is now available online or on demand through providers like DTV or Time Warner) have been positive, praising the show’s willingness to explore strange territory and essentially leave viewers adrift as they try to navigate the narrative’s many twists. The idea of using the narrative as a puzzle is often put to good use in film noir thrillers – think Memento or Dark City – but it is rarely done in television, and nowhere in the current landscape. Psychological thrillers that can toy with one’s head while maintaining an air of plausibility are always fun for the viewer that wishes to engage with his entertainment. Shyamalan has always had a gift for manipulating audience expectations and crafting a spooky story, and now has the ideal project for his transition to television. Wayward Pines premiered on Fox Thursday, May 14, and is sure to be one of the most talked about shows of the summer season.

See the Wayward Pines Pilot Episode at San Diego Comic-Con (and get autographs!)

If you managed to get tickets to the San Diego Comic-Con, here’s your chance to get an early look at the upcoming Fox TV series, Wayward Pines. You may also get a chance to pick up […]

Shyamalan and his associates are seeking somewhere with an “idyllic small-town look” that’s “near a forest with pine trees,” according to Sharon Pinkenson, executive director of the Greater Philadelphia Film Office. Bucks County is ready […]

Terrence Howard will play the sheriff in Wayward Pines, a mystery drama to be directed by Shyamalan. Howard, an Oscar nominee joins Matt Dillon; Melissa Leo, Carla Gugino and Toby Jones, according to The Hollywood […]