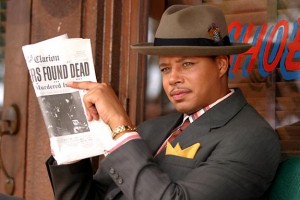 Terrence Howard will play the sheriff in Wayward Pines, a mystery drama to be directed by Shyamalan. Howard, an Oscar nominee joins Matt Dillon; Melissa Leo, Carla Gugino and Toby Jones, according to The Hollywood Reporter. The 10-episode drama is based on the best-selling novel of the same name by Blake Crouch and it’s described as a thriller in the vein of Twin Peaks.

Ethan Burke (Matt Dillon), a Secret Service agent arrives in the bucolic town of Waryward Pines, Idaho, on a mission to find two missing federal agents. But instead of answers, Ethan’s investigation only provokes more questions. Each step closer to the truth takes Ethan further from the life he knew, from the husband and father he was, until he must face the terrifying reality that he may never get out of Wayward Pines alive.

Terrence Howard will be playing the role of Sheriff Pope, a law enforcement go-to guy in the town. Ethan believes Pope is out of his mind, but Pope thinks the same of Ethan; Pope takes offense at a Secret Service agent showing up on his turf and telling what to do.

Chris Hodge (The Playboy Club) has penned the script with Shyamalan, who along with Donald De Line and Ashwin Rajan will be executive producing the series for Fox. Howard will next be seen in The Butler; Prisoners and The Best Man Holiday.

‘Lady in the Water’ DVD Rumors and Tid-bits…

Although ’Lady in the Water’ is just making it’s debut in many overseas markets, it has faded from many of the theaters in America. Thus the attention has turned towards the DVD release. ‘Lady in […]

Film Score Monthly has posted a podcast discussing James Newton Howard’s 5 scores to M. Night Shyamalan films. There isn’t much else to say other than it’s a very enjoyable listen and they have many […]

Times of India: Q&A: ‘All my movies are conversations about faith’

Manoj Night Shyamalan likes to be called Night. It could’ve something to do with the dark eerie supernatural thrillers that he specialises in. There’s certainly no night-like quality in his sunny smiling positive personality. Night […]