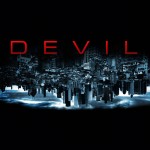 In what I think is more of a non-issue, Box Office Mojo has updated their database title for the upcoming Night Chronicles release Devil.  Why is this a non-issue?  While it is odd that they chose to do this so soon after The Last Airbender came out, I don’t think it has much to do with the reception of that film.

If you look at the name change list, you’ll see things like The Green Hornet changed to The Green Hornet (in 3D) which is clearly not going to be the official title.  The Night Chronicles is a production banner and the film’s art hasn’t ever included the words The Night Chronicles on it.  All of the evidence points to the fact that the film was always intended to be titled Devil, just as the second film is titled Twelve Strangers.  After all, Night is using the banner to work with new up-and-comers and help them to perhaps get their work out to more people.

It does show confidence in the work that is being done on these films, however, to not include that as part of the title.  The final official release date of Devil is September 17, 2010.

-via Shock Til You Drop

In unrelated news: Box Office Mojo also reports that “James Cameron Presents Sanctum (3D)” has been renamed to drop any reference to James Cameron. It’s now simply “Sanctum (3D).” One wouldn’t be going out on a limb to say this might be because AVATAR was a box office failure.

Thanksgiving is over and hope you guys had a good one with your relatives and friends. This weekend I have been searching  the net for some important Shyamalan interviews and I selected 3 good ones which […]

The Last Exorcism director Daniel Stamm might be directing the next movie in The Night Chronicles series, Twelve Strangers, according to HeyUGuys. The site was at a roundtable interview session with Daniel Stamm, where he […]

Just about few days ago it was announced that Universal studios won’t screen their thriller “Devil” produced by M.Night Shyamalan to critics.  Is that a bad sign or a good sign for a film? – […]