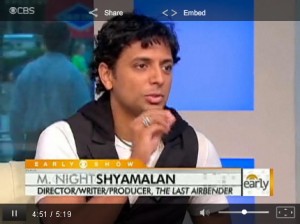 When Night was on the CBS Early Show today, he spoke about how he wanted to try to do thrillers between each of the Airbender films.  Over the course of that discussion, however, he mentioned that the first film that he wrote, and produced, but did not direct, is coming out in September:

“I’m trying to do the thrillers in between (“Airbender” films) if I can. … I knew what I was signing up for. I wanted to do a big long form movie. I’m producing movies that I wrote. So the first one of those is actually coming out in September called ‘Devil.'”

Not only that, but the host repeated that month right after.  According to IMDB, the release date is February 11, 2011, though.  Perhaps it’s going to hit some film festivals before that release date?  It seems a little quick, as there haven’t been any trailers for the film, yet.

We’ll try to get to the bottom of this, though.

It appears that The Night Chronicles: Devil will be released on September 17, 2010, moved up from its’ previous release date.  Shock til you Drop interviewed Night yesterday as well, and he confirmed that date to them.

With the release of Rogue Pictures’ Devil from the Brothers Dowdle (Quarantine) and based on an idea and produced by M. Night Shyamalan, less than a month away on September 17, Rogue has stepped up […]

M. Night Shyamalan recently talked with Australian newspaper ‘The West Australian’, as his film ‘Lady in the Water’ makes its debut there this week. It’s a pretty interesting interview that covers the split with Disney, […]

Dev Patel has defended the use of the term “bender” in The Last Airbender. The film, directed by M. Night Shyamalan, is about a boy who can control the four elements – earth, wind, fire […]