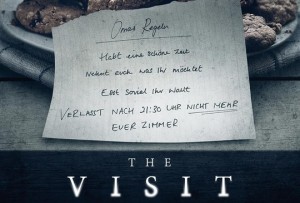 Earlier last month we posted The Visit Blu-ray release date, which hits the shelves on January 5, 2016. Now, we have an insightful review of the Blu-ray, thanks to Devon Powell which you can read here, along with some interesting quotes from writer/director Night himself, talking about his successful suspense thriller.

The film, as some of you’re aware, was made for $5 million and went on to earn over $97 million worldwide. Now, Night is working on his new micro-budget suspense thriller, Split, starring James McAvoy, which is set for release on January 20, 2017. A few weeks ago, Night finished filming Split in his hometown of Philadelphia and now he’s occupied with the editing process.

For the fans, who truly enjoyed The Visit and also looking forward to owning on Blu-ray, click here to participate in the contest. Thanks to Universal Pictures and Alfred Hitchcock Master page on Facebook for conducting the contest.

M. Night spent a few minutes with the IESB’s Robert Sanchez discussing his latest opus, Lady in the Water. He also revealed that he is already planning his next twisted tale.

We were wondering what would happen with Glass, seeing as it’s a sequel to Unbreakable. Buena Vista (Disney) was a key player in that film, and as Shyamalan kept building up good will with each […]

The time has come—nearly 20 years in the making, the sequel of all sequels (besides the Blade Runner 2049) to Shyamalan’s father of all superhero films, Unbreakable, and his psychological thriller Split. Shyamalan took the […]