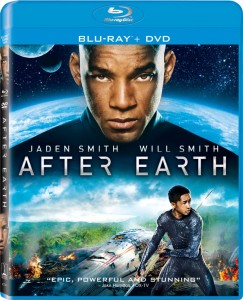 Experience the post-apocalyptic world when Sony Pictures Home Entertainment releases AFTER EARTH on Blu-ray™ Combo Pack and DVD on October 8th. Starring Jaden Smith (The Karate Kid) and two-time Academy Award® nominated Will Smith (2006, Best Actor, The Pursuit of Happyness; 2001, Best Actor in a Leading Role, Ali), this action-adventure follows Kitai Raige (Jaden Smith) and his father Cypher (Will Smith), as they set out on a routine mission that crash lands them on a hostile planet Earth. Now, 1,000 years after Earth has been quarantined, everything on the planet has evolved to kill humans. Unable to contact home, and forced to battle exotic creatures and dangerous terrains, Kitai and Cypher must fight together to survive.

The AFTER EARTH Blu-ray Combo Pack and DVD both come with all-new featurettes, including exciting behind-the-scenes looks at the making of the film, and a video announcing the winning team of the XPRIZE After Earth Challenge, where teams from around the world submitted video proposals to address the global challenge of promoting a more sustainable way of living, as well as the steps they would take when using an unmanned rover to assess whether “Nova Prime,” mankind’s potential new home, is inhabitable.

Exclusive to the Blu-ray are three bonus featurettes, including “Building a World,” “Pre-Visualizing the Future,” and “The Animatics of After Earth” – glimpses into the unique approaches taken to create the After Earth universe. The Blu-ray Combo Pack also comes with a never-before-seen version of the film’s opening sequence.

A crash landing leaves teenager Kitai Raige (Jaden Smith) and his legendary father Cypher (Will Smith) stranded on Earth, 1,000 years after cataclysmic events forced humanity’s escape. With Cypher critically injured, Kitai must embark on a perilous journey to signal for help, facing uncharted terrain, evolved animal species that now rule the planet, and an unstoppable alien creature that escaped during the crash. Father and son must learn to work together and trust one another, if they want any chance of returning home.

‘After Earth’ two novel plans, multiple shorts with a single-issue comic and more

July 13, 2012 Rohan After Earth Comments Off on ‘After Earth’ two novel plans, multiple shorts with a single-issue comic and more

We reported few days ago that at the After Earth Comic-Con panel, which is tomorrow (July 14th) at 10: 00 AM screenwriter, Gary Whitta (Book of Eli) will be joining the comic book artist Beni […]

In advance of the nationwide release of After Earth, the highly anticipated film in theaters May 31, Columbia Pictures is teaming up with Google for a live “After Earth Day” Google+ Hangout today, April 23 – the day after […]