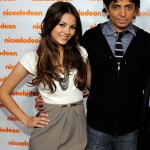 M. Night Shyamalan made an appearance at Nickelodeon’s Upfront in New York.  There is no word on if he showed any new footage from his Avatar: The Last Airbender adaptation that is coming this summer.  At the event, Nickelodeon presented their new and returning properties to exhibitors and different media.

Nickelodeon got its Thursday-morning upfront pitch rolling with an extended cameo by director M. Night Shyamalan (The Sixth Sense), who is helming the theatrical The Last Airbender for Nickelodeon Movies. Based on Nick’s animated strip Avatar: The Last Airbender, Shyamalan’s live-action flick opens July 2.

While Shyamalan didn’t floor buyers with one of his patented vertiginous plot twists, the standing-room-only crowd at New York’s Manhattan Center suggested that the story line of this year’s upfront is likely to take a radically different direction from last year’s bazaar. Jim Perry, evp, 360 brand sales, Nickelodeon/MTVN Kids and Family Group, said that while he would not call the market, he firmly believes that “it will do be stronger and will move earlier,” adding that Nick enters the season “in a great place.”

Producer Frank Marshall has worked on a few of Night’s films over the years, and has many great movies on his resume.  He’s a great producer with a lot of insight into films that no […]

A look at a battle suit from After Earth

With the Comic-Con Panel ended this past Saturday, we didn’t only get to read the interesting concept behind the film, its comics or novel, we were also treated with a sapid viral video released not too […]

Fan Voice #1: How to get an Autographed Item from Shyamalan, Split 2

Welcome to Fan Voice, our new column where we answer questions from visitors to our site as best as we can. We’ve been fans of M. Night Shyamalan since 1999, and with a website full […]