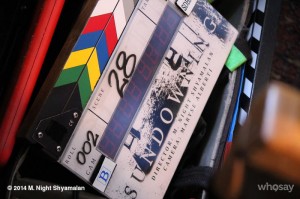 M. Night Shyamalan, earlier this year, completed filming on a low-budget movie that was then called “Sundowning.” It seems the movie has been renamed “The Visit” and worldwide distribution rights have been acquired by Universal Pictures.

The Visit focuses on a brother and sister who are sent to their grandparents’ remote Pennsylvania farm for a weeklong trip. Once the children discover that the elderly couple is involved in something deeply disturbing, they see their chances of getting back home are growing smaller every day.

Shyamalan shot the film in a particularly covert fashion, and it’s rumored to be closer to spirit of his first few films. It was self-financed and shot in and around his home in Pennsylvania. Shyamalan wanted to get back to his roots and make a film outside the studio system.

We don’t usually make reports like this, as they are rather odd reports to make, but since we’re an M Night fansite, here you go: M. Night Shyamalan and wife, Bhavna, sipped mojitos while dining […]

Party, too, was a real happening

The Happening still has two more weeks of shooting left, but M. Night Shyamalan and fellow filmmakers hosted the thriller’s wrap party Saturday night. (The idea: Celebrate while the entire cast is still in town.)

Times of India: Q&A: ‘All my movies are conversations about faith’

Manoj Night Shyamalan likes to be called Night. It could’ve something to do with the dark eerie supernatural thrillers that he specialises in. There’s certainly no night-like quality in his sunny smiling positive personality. Night […]