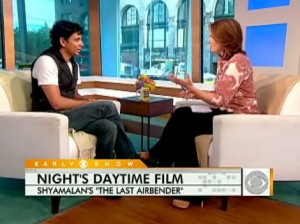 M. Night Shyamalan appeared this morning on CBS’ Early Show and spoke about The Last Airbender.  He spoke frankly about a number of topics, and you can see the video of the interview below!

So why make a kid movie?

Shyamalan told “Early Show” co-anchor Erica Hill he was looking for something epic and long form to do next.

Shyamalan explained, “(I’d) been asking my agents to find me something, and in the end it was my 7-year-old daughter that found me the movie. She was watching a show and said, ‘Oh, this, is so great, watch it, watch it.’ Of course, I ignored her for a long time. … And finally we watched it and we were about to eat dinner, and ‘I said this would make a great movie,’ and everybody went nutso and my wife was like, ‘Call the studio, find out if they’re making it.’ And I spent the next year campaigning that I should make the movie. And luckily they said yes.”

Shyamalan, Hill remarked, is intimately involved in the making of his films. He wrote, directed and produced “The Last Airbender.”

And he had even more control with the special effects.

He explained, “I could tweak the hair, tweak the color of your shirt, I can do everything. And so we spent an extra year making the movie. In which time I could work with the animators and talk about design and movements, maybe the creature needs to move with this kind of — I’d even say the creature’s not intelligent enough, it needs to be moving with awareness. And you could go that deep into every detail.”

As for working with children, Shyamalan said, he finds them very “pure.”

He said, “They don’t know how to fake things yet as we become, you know, adept at pretending that we’re happy to be around somebody. They don’t know how do that. Everything on their face and so pure. I speak to them very much like I would speak to any actor, and tell them the feelings of the character, what the character is going through, and you can see that moment where it goes click and it’s very pure.”

But Shyamalan has faced some criticism about the film’s casting. Hill said some of the characters were cast as Caucasians that some say should have been cast to Asian actors.

Shyamalan said, “It’s a very small amount of people. … We’re talking about a few thousand people, but I’m saddened because they want them to look at me and be like, ‘It’s fantastic, this Asian guy has the mantle. His name is on the toys. This is fantastic.’ Go get a Happy Meal, you’ll see my name, this is good stuff. I want them to feel proud and excited. I want everyone to feel that way.”

He continued, “But I think there’s a misunderstanding about anime. Anime in and of itself is an art form where the features are ambiguous. When we watched the cartoon, I saw my daughters in it. I was like no doubt these are my daughters in the roles. And every family felt that and that’s the beauty of anime. It’s the most culturally diverse summer movie of all time. That should be its greatest asset is that it’s so culturally diverse. Every nationality is represented with the exception of blond people.”

Shyamalan hopes to make three films in this series.

Writer, Director and Producer, M.Night Shyamalan tells Metro about his feelings towards using CGI, his favorite directors and his most challenging film to date. M.Night Shyamalan, 40, first found commercial success in 1999 with The […]