Amazon.com has recently posted the cover for the upcoming book about M. Night Shyamalan and his movie Lady in the Water. 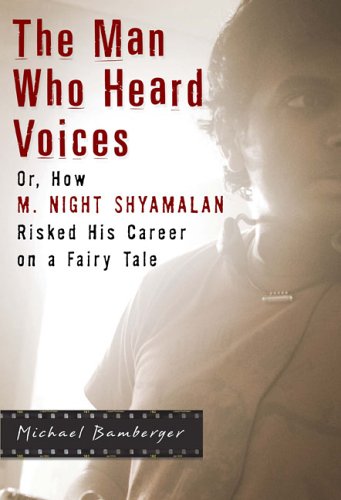 The Man Who Heard Voices

An acclaimed writer takes readers inside the world of M. Night Shyamalan – the most successful filmmaker of his generation – as he creates a new movie masterpiece

In 1999, filmmaker M. Night Shyamalan exploded onto the cinema scene with his supernatural thriller The Sixth Sense, which garnered major acclaim and raked in massive box office numbers around the globe. Since then, his phenomenal commercial and critical success has continued as his films – including Unbreakable, Signs, and The Village – have grossed over $1.5 billion and reinvented the thriller genre. But throughout his rise to prominence, Shyamalan has remained separate from the Hollywood system, living and working solely in his hometown area of Philadelphia, and keeping his ideas, filmmaking techniques, and business practices tightly-kept secrets. In The Man Who Heard Voices, journalist Michael Bamberger takes readers inside Shyamalan’s world for the first time, getting total access to the man who has been called “the modern-day Hitchcock” as he prepares, creates, and test-screens his next film, Lady in the Water, which stars Paul Giamatti (star of Sideways) as a building superintendent and Bryce Howard (star of The Village) as a mysterious sea nymph. Bamberger’s intimate perspective and insightful narrative prose will bring to life Shyamalan’s creative process – from his multiple drafts and revisions of the screenplay to his on-location work with his cinematographer and crew and his relationships with the actors under his direction. The book also follows the high- stakes business decisions behind the scenes, including his agonizing decision to move from Disney to Warner Bros. for this film, his involvement in the studio’s massive marketing campaign, and the evaluation of the crucial initial test-screening of the film.

MICHAEL BAMBERGER is a senior writer for Sports Illustrated and the author of four books, including Wonderland: A Year in the Life of an American High School and To the Linksland.

Career overviews of the six biggest

Found an interesting article  by the folks at sofas and sectionals today. These guys have created a stat-packed tables detailing just how much money 6 of the biggest name directors in the world have both […]

Seems like Bruce Willis is one busy dude this year at Comic-Con. He had the chance to stop by The Expendables panel and talked with MTV about his future projects, namely Die Hard 5 and […]

// THE FOLLOWING WAS AN APRIL FOOLS JOKE// Touchstone Pictures announced recently that director M. Night Shyamalan plans on releasing a “Director’s Cut” edition of his 2004 thriller “The Village.” The DVD is planned for […]