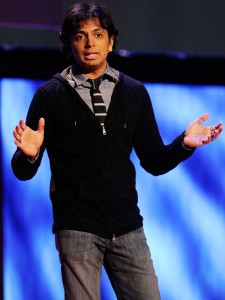 The filmmaker has revealed he already has two further instalments in mind in what’s envisaged as a potential franchise.

The movie is based on the children’s animated series Avatar: The Last Airbender, with the Avatar part dropped for the big screen because of James Cameron’s sci-fi epic of the same name.

The story follows the adventures of a young boy called Aang in a world divided into four nations, representing Earth, Air, Fire and Water.

In this first film, the Fire Nation has waged a campaign for global domination and it’s only Aang, as the Avatar, who can manipulate all four elements and restore balance to the world.

Despite the challenges of the film and the criticisms of racism over his casting choices, Shyamalan hopes the movie does well enough for him to develop the story in further instalments.

“If I get the opportunity to make the second and third movies, I’ll be much more certain about how to approach it in terms of characters and feel confident in how to use all these things as tools, the CGI, the extras and the costumes,” he told us.

He adds he wants the story to become more “operatic” as it evolves. “In the second part, which is my favourite, it gets darker, things go wrong and Aang makes a lot of bad choices. I love that as a second act of the story.”

Shyamalan was responsible for adapting more than 30 hours of stories into this first release and plotted the film on boards for a year before cameras started rolling.

He explained: “I knew from the moment I put the first words on the page that, to do a movie of this complexity, you have to put the work into it. I was scared to death every day of shooting, as it could be so overwhelming, and there were so many unknowns.”

That included working with computer-generated imagery (CGI), something he once described as his “nemesis”.

“I’m a firm believer in limitations,” he said. “I think CGI is a way of saying anything’s possible, we can fix anything, we can change the colour of your eyes and that takes you away from who you are, as you need limitations, so it’s a very scary process to go into.

“I had to put my own limitations on myself and on the movie and say we’re not going to use CGI here, we’re going to build it and we’re just going to show a glimpse in the edges of frames, like tails of creatures leaving and things like that. It’s a tricky thing, you have an obligation to the fans and an obligation to cinema.”

A stickler for authenticity, Shyamalan moved production to the icy landscape of Greenland for the film’s early scenes, a feat that brought its own problems, such as how to keep everything and everyone from freezing.

But it wasn’t the CGI or sub-zero conditions that proved Shyamalan’s biggest challenge; that accolade went to the 6,000 extras brought in for the film’s epic scenes.

“I didn’t expect the extras to be such an ordeal,” says Shyamalan. “I’m concentrating on the main actors but behind them is someone mugging for the camera and you’re going ‘Cut! Who are you? Why are you doing that?'”

He says pouring all his energy into the fantasy blockbuster has taken its toll: “I’ve only just finished the film and I’m as tired as I ever have been in my life. I’ve basically been making movies since I was 10. Every single day, I’ve done something to do with movies, and never once felt this feeling.

“Maybe I’m getting old, I don’t know. It felt like it took every little bit out of me to hold it together.”

But despite the exhausting challenges, he’s ready to move forward.

“There’s a great quote from a yoga master I met who said, ‘In life you should burn brightly and then let it go’,” he says. “And right up until the last second I will tweak the film and then they say, ‘You’ve run out of time’ and you let it go.”

He’s as philosophical when asked about the highs and lows of his career, for while The Sixth Sense received critical acclaim, his subsequent films have failed to live up to expectation.

He believes he has the advantage of living on a farm in Pennsylvania, far from the epicentre of the film industry in Los Angeles. “For me I am so isolated. I close the door on my farm and write and come out with something and I’m so incredibly lucky to make original movies,” he said.

“When we made The Sixth Sense in 1999, the industry was all original material. We had Being John Malkovich, American Beauty, The Matrix and The Blair Witch Project. Every single movie that was dominating cinema was by an original filmmaker with an original point of view and clearly that’s not the case today.

“But every movie needs to be beautiful and fantastic for me and I hope the audience will see the beauty in it too.”

We don’t usually make reports like this, as they are rather odd reports to make, but since we’re an M Night fansite, here you go: M. Night Shyamalan and wife, Bhavna, sipped mojitos while dining […]