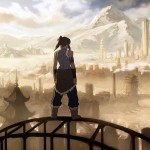 It’s long been known that the guys behind Avatar: The Last Airbender were working on a sequel to the series, one that is set in the same world but tells a different story.

The shroud of secrecy has been lifted, and that sequel has been announced with the working title: The Legend of Korra.

Nickelodeon executive Brown Johnson says the new series will focus on a teenage girl avatar named Korra. Brown describes her as hotheaded, independent and “ready to take on the world.”

Here’s a summary from the Wall Street Journal:

“The Legend of Korra takes place 70 years after the events of ‘Avatar: The Last Airbender’ and follows the adventures of the Avatar after Aang – a passionate, rebellious, and fearless teenaged girl from the Southern Water Tribe named Korra.”

Korra’s quest eventually leads her to Republic City – the epicenter of the world of “Avatar.” A metropolis powered by steampunk-type technology, the city is inhabited by people from all nations. Korra finds that Republic City suffers from rampant crime and is also dealing with an anti-bender revolt. Korra is tutored by Aang’s son, Tenzin, is the ways of airbending.

The series is set to premiere sometime in 2011!

Talk about a visually stunning film. This couldn’t come sooner. Consider me already in line. Video updated for the 4th time. Now in 1080p! Look for Appa in the upper left corner around second 9.