Looks like the folks from MTV are the big fans of M.Night Shyamlan’s dark superhero film “Unbreakable”.  They brought M.Night Shyamalan into town last week for a look back on the film 10 years after it first hit theatres and whoever attended the special screening at the New York Comic Con 2010, MTV give away bunch autographed posters, copies of the movie, and various other promo items at the panel, yet that’s not it.

There is more “Unbreakable” stuff to give away including tickets to next weeks’s screening of ‘Unbreakable’ at the Philadelphia Film Festival.

Here is what MTV is giving away:

– “Unbreakable” t-shirts (two styles) in sizes L-XXL. There are limited numbers of certain sizes and designs, but I’ll try to make sure winners get as close to the size they’re looking for as possible.

– Two pairs of tickets to the screening of “Unbreakable” at the Philadelphia Film Festival on Thursday, October 21. You can find more info about the screening here: http://pff10.org/

Here’s what you have to do to win an “Unbreakable” shirt and/or hat:

2. Each weekday for the next few days (starting Monday, October 18), I’ll randomly select a few winners from Twitter and the comment section. I’ll make sure to post each day’s winners on Twitter and in the comment section (look for “[email protected]”), so you know to keep trying if you didn’t win yet. Keep in mind: You must be following @MTVSplashPage to win via Twitter, because I need to be able to direct-message the winning account.

The winners will receive an “Unbreakable” hat and/or t-shirt (depending on how much of a response we receive).

Here’s what you have to do to win tickets to the “Unbreakable” screening at the Philadelphia Film Festival:

1. Leave a comment here with the phrase “UNBREAKABLE TICKETS” letting us know how much you love the film and that you’d like to win a pair of free tickets to the screening.

2. On Monday (October 18) at 6 PM Eastern, I’ll randomly choose two winners from everyone who left a comment with the phrase “UNBREAKABLE TICKETS” and send them a message via their MTV.com reader account. Make sure to set up the necessary account notifications and/or check your account for messages that evening, as I’ll need your shipping info ASAP to get you the tickets in time! (You’ll get a message from “[email protected]” asking you for your info.)

And that’s all you have to do!

IMPORTANT NOTE: The contest is open to all contestants, not just U.S. and Canadian residents. However, you probably shouldn’t try to win the “Unbreakable” tickets if you can’t make it to Philadelphia on Thursday evening. 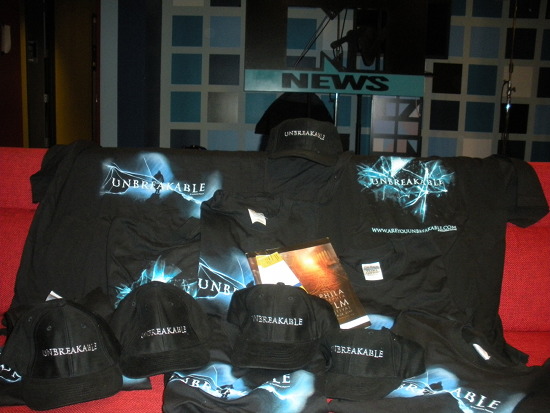 Shyamalan Will Be A Keynote Speaker at the 3D Summit