Last Tuesday, a member of an Avatar forum, who claimed to be an on-site production crew of The Last Airbender movie, defended M.Night’s actions in the movie production. Her posting quickly went viral on social media and even picked up by the likes of JoBlo and CinemaBlend. One week later, I replied to her posting to clear up some misconceptions in the ensuing discussion. While others responded positively to my points, she was upset and concerned that the increased attention to her postings could affect her career. The admin then removed all discussions on the movie under the pretext of “too much traffic“, just one day after I posted my reply, which I have reworked as this follow-up article.  Most of her postings are still available in Paul’s write-up and elsewhere.

As the saying goes, “success has many fathers, but a failure an orphan“. The movie was perceived as a failure, so M.Night was blamed for everything “wrong” in the movie to the point of irrationality, including the lousy visual effects (rendered by ILM and supervised by Star Wars producers Kennedy/Marshall), the shaky camera work (shoot by Lord of the Rings cinematographer Andrew Lesnie), the horrid costumes (designed by Harry Potter’s and The Hunger Games’ Judianna Makovsky), the cheap production sets (designed by The Hunger Games’ Philip Messina), the sloppy editing (done by James Cameron’s frequent collaborator Conrad Buff IV) AND the unbearable music (composed by James Newton Howard himself). Personally, I loved the movie despite its flaws, but blaming M.Night for everything is as ludicrous as crediting him for everything.

What it came down to was M. Night really was the only one who knew the show and what he was doing. The producers, who are actually in charge of at least 80% of production including casting…. not so much. They clearly never bothered to watch the show.”

Legally, the producers are the head of the movie production, not the director, who must align his vision to theirs. Yes, M.Night is also one of the producers but he still has a fiduciary duty to deliberate and make decisions with the other six producers, most of them HAVE “bothered to watch the show“. Mike and Bryan obviously have. Scott Aversano is a huge fan: he is the Nick exec who first pushed for an ATLA movie in early 2006 after Book One was aired, though Nick turned down his proposal. M.Night became a fan much later in the year after he watched the show with his kids during Halloween. Frank Marshall and Kathleeen Kennedy are probably only casual fans, but they signed up as producers as they are huge fans of Hayao Miyazaki, having exclusively produced English-language versions of his movies at reduced fees. This also means, ripping off Princess Mononoke’s finale by having Koizilla in a Miyazaki-inspired movie like The Last Airbender would have strained their working relationship with Miyazaki himself. Sam Mercer may have watched enough of the show, but he definitely became influenced by Miyazaki when he later produced Snow White and the Huntsman.

With that many producers heading up a movie, visions will get compromised, moreso than the animated series with only Mike and Bryan producing. The producers must also sell the movie to the studios, their real end-customer. While most of us like to believe otherwise, the studios ARE entitled to “improve” these visions, because they are ultimately the ones financing the movie and distributing it to the movie-going public. While the movie did not turn out the way Bryan had envisioned, he politely said in a Blu-Ray featurette that “It’s so cool to see this team of incredibly talented people with great resources go off and do their version of our world. We always knew it will be a different vision filtered through these other artists. We got to tell the show the way we wanted to, and now it gets to be a new variant and that’s cool with us.” Sadly, his resentment of the movie grew until he finally succumbed to the hatedom. Perhaps there is a little Vaatu in all of us.

Nicola was hired because she’s the daughter of someone one of the producers owed a favor to as Hollywood loves its nepotism. (Her audition tape was subpar at best).

Actually, Nicola auditioned through her mother’s connections, not her dad’s. She wore a kimono for her audition, to which M.Night joked that she just woke up and came in with her pajamas. Her parents may have known some of the producers before, but the connections definitely became stronger after the July 2008 audition, e.g., her dad was at a human rights fundraiser with Marshall and Kennedy in October 2008 and at arts center fundraiser with Shyamalan family in November 2008. If you think her performance was subpar, you may choose to believe that those were payoffs for hiring his daughter. If you are impressed with her as I am, you may choose to believe that she won the role of Katara by her merits. Seychelle Gabriel was also one of the finalists for Katara. Had Seychelle won the role instead, would haters accuse her of winning the role via the casting couch?

Whatever issues you have with connections in Hollywood, they don’t necessarily guarantee an actor gets any part. Nicola still has to compete with other candidates, some more well-connected than she is. Paramount doesn’t really care who was cast as Katara and Sokka, just that one of the two primary characters must be cast with a bankable actor, either Aang (lead for story A) or Zuko (lead for story B). M.Night chose to cast Aang with an unknown martial artist Noah Ringer, so he had to cast Zuko with a well-known celebrity like Jesse McCartney.

“wait a minute this show is kind of anime-esque and we’re hiring a bunch of white kids. Um.”. So what did they do? Because they couldn’t can Nicola without someone being really ticked, Jesse willingly bowed out and went with another project offered at the time.

Nope, it wasn’t like that at all. All actors, white or not, can only be hired through the casting process. Once the roles are cast, firing a white actor to hire a non-white is still racial discrimination hence illegal, as messed up as it sounds. Jesse wanted out. Among the four leading kids, Jesse had the most to lose. The racebending backlash got to him and/or his agents. He is not willing to let THAT tarnish his singing career over a movie adaptation of a “silly kids show”, especially one directed by M. Night Shyamalan. A few weeks before the filming was to start, he found a loophole in his contract and used it, RIGHT AFTER claiming he was “looking forward to” do the movie in an MTV interview. 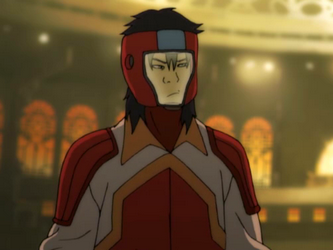 The producers were f**ked. M.Night may not be willing to do the movie without Nicola, but Paramount was not willing to finance the movie without someone as bankable as Jesse, even though they were only banking on his popularity as a teen pop singer. Dev Patel, on the other hand, is a trained actor and a martial arts practitioner, and became more bankable than Jesse after winning Oscars for Slumdog Millionaire. Dev also got some moves on stage, so was able to substitute Jesse a month later at the Nickelodeon Upfront 2009 to promote the movie. Had Dev not signed up in the last minute, Paramount would have pulled the plug just like Warner Bros. did with The Fountain movie when Brad Pitt walked out.

The Chinese being changed to gibberish was a decision by Paramount. They didn’t want to risk any potential offensive screwups that have happened in other films.

That’s actually true. The Last Airbender is one of the lucky 20 foreign movies permitted to be shown in China under year 2010 quota, so Paramount had changed things to avoid accusations that Fire Nation is “Imperial China” in an unholy quest to colonize the world like the whites did, spreading Chinese culture and Mandarin language instead of Western culture and English language all over the globe. The Red Dawn movie faced a similar accusation with the “bad guys”; it was originally scheduled in the same year as The Last Airbender, but was pushed back to 2012 and had Chinese symbols and dialogue digitally altered to Korean.

Other than the made-up “gibberish”, the Fire Nation was also revised with a fusion of elements from Roman, Greek, Japan and Mongol, the last two being historical enemies of China. The Chinese elements were mostly kept with other nations, particularly the Earth Kingdom but that nation is not the focus of the first movie. We still have to explain how the Japanese-themed Kyoshi Warriors from Japan-inspired Kyoshi Island are the “good guys” in the Earth Kingdom. Or, we can just cut them out from the movie. 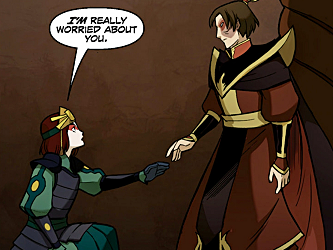 Also, look up “Tibetan sovereignty debate“. No studio is going to cast Tibetan actor for Aang and Chinese actor for Zuko, unless they want to get in the crosshair of the government of China. I explained many of the geo-political issues on this thread on Avatar Wiki. In short, Tibet wants to be independent but China wants to preserve the union. The last time our Southern states wanted to be independent, we had a bloody civil war. Since the 1959 Tibetan uprising, the present Dalai Lama named Tenzin Gyatso fled China to India, where most Tibetan followed and headquartered. China then outlawed the reincarnation of Dalai Lama. Do you honestly expect an American studio to have a Chinese-themed Fire Nation to ethnically cleanse Tibetan-themed Air Nomad, leaving a lone survivor as the main and titular hero AND have his father figure and teacher murdered, who is also named Gyatso?

For the record, Aang (昂) was pronounced as “Ahng” in the movie, not “Ong”. If you watch this video interview on The Legend of Korra, you may notice that both Yoo Jae-myung (of Studio Mir) and Susan Lee MacDonald (of INNERview) “mispronounced” Aang the same way. Sokka (創価) was pronounced “Sohka” because it was inspired by Japanese names as with other Water Tribe characters in the original series (although new Water Tribe characters in The Legend of Korra are given Inuit and Alaskan names). Iroh is a made-up non-Asian name but its pronunciation was changed to “Ee-roh” due to cultural sensitivity with the actor playing him, Shaun Toub, who is an Iranian-borne Persian Jew. Most Middle Eastern folks get annoyed when Iran is pronounced as “Eye-ran” instead of “Ee-ran”, and likewise with Iraq as “Eye-rack” instead of “Eye-rock”. Avatar was pronounced both ways, “Av-uh-tahr” like the show and also “Ah-vuh-tahr”, depending on the speaker.

The Last Airbender Manga from Del Rey and Nickelodeon

In detail, they are looking for individuals of Cambodian, Mongolian,Chinese, Korean and Thai Descent … MARTIAL ARTS EXPERIENCE IS A PLUS!!! Anyone cast in New York will be traveled to Philadelphia, given housing and per […]