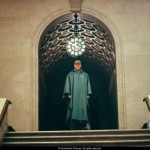 Here we go again.  Every time someone from Unbreakable does a movie, they’re asked about the sequel.  I’d love to see a sequel, but it’s been 10 years.  I remember when the original came out, and everyone’s knee-jerk response was “what a weird and terrible movie” because it wasn’t The Sixth Sense 2.  Over time, the film found its audience, though, and now that audience wants a sequel.  Here’s the latest, from Bruce Willis:

“I talked to [Shyamalan] over the holidays, and he is still thinking about doing the fight movie between me and Sam that we were going to do,” Willis told MTV News.

“We chose to do the origin,” he explained, indicating that there was discussion early on about whether Willis’ character and the villain played by Samuel L. Jackson should square off in the first movie or a sequel.

Shyamalan & Jason Blum on The Visit

July 12, 2015 Rohan The Visit Comments Off on Shyamalan & Jason Blum on The Visit

M.Night Shyamalan is busy promoting the upcoming thriller The Visit — he was at the San Diego Comic-Con on Thursday, where they screened the film at the Gaslamp Theater. Deadline picked the talk between Jason […]

The official trailer for the first film in the Night Chronicles series, Devil, has just launched online via Apple. […]