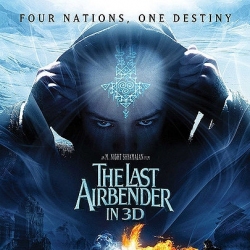 According to “Box Office Mojo ” M.Night Shyamalan’s THE LAST AIRBENDER which is at a distant No.2 spot has collected an estimated $40.65m at 3,169 locations ($12,827 per-theater average) in the US/Canada.

The reviews for “The Last Airbender” has been overwhelmingly negative, word-of-mouth has been at best unenthusiastic (a “C” as per CinemaScore), and there have been numerous complaints about Paramount/Shyamalan’s decision to use a white kid in an East Asian role. Yet, the Paramount release starring Noah Ringer, Dev Patel, Nicola Peltz, Jackson Rathbone and Shaun Toub has scored a not inconsiderable $57m after only four days.

It’ll probably cross the $100m mark within the next ten days or so. How far it’ll go above that remains to be seen.

Although it seems THE LAST AIRBENDER won’t get close to recover its $150m production costs in addition to $130m in marketing costs at the North American box office, it will likely not turn out to be  a disaster many had been predicting since its release on thursday, July 1st.

Also not to forget the overseas market which should come to the rescue, as big, special effects movies tend to do extremely well in foreign countries, e.g., Iron Man 2, Avatar, Prince Of Persia: Sands Of Time and 2012.

M. Night Shyamalan talks The Visit and another Supernatural Project

With The Visit scheduled for a September 11, 2015 release, Shyamalan has been working on his next project. He has a tendency to start working on multiple projects, and then choose one to focus on. It […]

M. Night spent a few minutes with the IESB’s Robert Sanchez discussing his latest opus, Lady in the Water. He also revealed that he is already planning his next twisted tale.

The first film in the Night Chronicles series; Devil, has been picked up for distribution by Universal Pictures and set for release on Febraury 11, 2011. The film went into production late last year in Toronto after a long wait for Pennsylvania legislature to pass a tax credit for local film productions. It is directed by John Erick Dowdle (Quarintine), penned by Brian Nelson (Hard Candy), produced by M. Night Shyamalan and Sam Mercer, and stars Chris Messina (Julie & Julia). The first in a series of 3 films being produced in partnership with Media Rights Capital, Devil is a film about a group of people who are trapped in a elevator, one of which is the devil itself. So go ahead and mark your 2011 calanders, Devil hits theaters February 11th! […]