Despite the numerous negative comments and reviews M.Night Shyamalan’s THE LAST AIRBENDER narrowed the gap between 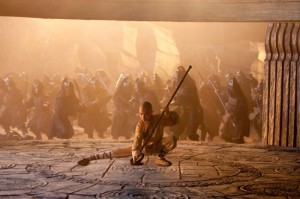 Monday’s No.1 and No.2 movie at the North American box office.

This Shyamalan’s actioner actually grossed $12.65m (vs. $13.54m for The Twilight Saga: Eclipse), according to Box Office Mojo.

One more drastic Eclipse attendance drop The Last Airbender can reach the top position at the North American box office.  To date, The Last Airbender has collected $70.5m about $20 million more than many had predicted. And in order for Paramount to recover its $150m production costs alone not including the $130m spent on marketing, The Last Airbender would have to earn approximately $270-$300m domestically, as studios only get around 50-55% of a movie’s box-office gross.

According to current box office numbers The Last Airbender doesn’t seem at all likely will get that far, but that’s where the overseas market should come to the rescue.

The Last Airbender will open internationally just within few weeks.

Shyamalan just tweeted about an hour ago announcing that principal photography is finished. Though, none of us has any clue what Sundowning is really about. All we know is that a single mother limned by […]

Writer and Director M. Night Shyamalan has been starting to break out of his shell, and his latest attempt at that is by joining Twitter and Facebook! The filmmaker is famously secretive and tends to […]