Alright, earning $244 million worldwide, ‘Glass’ is a success, especially since its budget was just $20 million funded fully by Night himself. The film is still playing in some theaters, so if you still haven’t watched it, book your tickets now to enjoy the film on the big screen before it’s available on 4K, Blu-Ray and DVD.

Per, Universal Pictures, the release date of the 4K Ultra and Blu-Ray is April 16th 2019, after it surfaces online on April 2, 2019 on digital platforms. As for its physical release, it comes with tons of palatable bonus features for us, including an alternate opening. 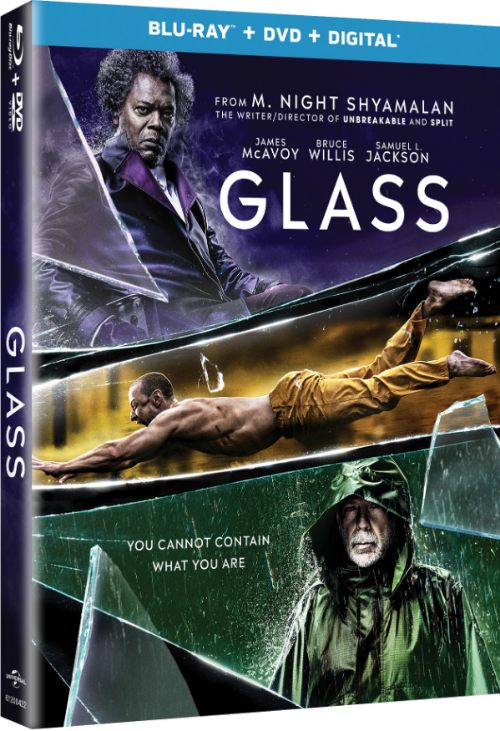 Writer-Director M. Night Shyamalan (The Sixth Sense, Signs) completes a mind-bending trilogy created nearly twenty years ago with GLASS, a comic book thriller available on Digital via the digital movie app MOVIES ANYWHERE on April 2, 2019 and on 4K Ultra HD, Blu-rayTM, DVD and On Demand on April 16, 2019, from Universal Pictures Home Entertainment. GLASS is a grounded-in-reality, comic-book thriller where the heroes and villains are people first. The thrilling culmination to the trilogy that started with Unbreakable and Split, stars James McAvoy (Split, Atonement), Samuel L. Jackson (Hitman’s Bodyguard, Avengers Franchise), Bruce Willis (Unbreakable, Die Hard), Sarah Paulson (Ocean’s Eight, “American Horror Story”) and Anya-Taylor Joy (Split, The Witch). Go inside the mind of master of suspense M. Night Shyamalan to uncover the connections and references that bring the three films together in one universe. Experience more than sixty minutes of never-before-seen features elaborating on his process and artistic vision including an in-depth look at the making of the film, deep insights on the characters, a never-before-seen alternate opening, and deleted scenes.

GLASS features “Shyamalan’s eccentric, intimately scaled superhero universe” (Manohla Dargis, The New York Times), while offering a closer look at the world of the Elijah Price, also known as Mr. Glass (Jackson), David Dunn (Willis), and Kevin Wendell Crumb (McAvoy) as they experience a series of escalating encounters as they escape from an asylum and embark on a thrilling battle of good versus evil. Producers M. Night Shyamalan, Jason Blum (Get Out, Halloween), Marc Bienstock (Before I Fall), Ashwin Rajan (Devil, The Visit) and executive producer Steven Schneider (Paranormal Activity series) reunite with GLASS for “one of the most original comic book movies in recent years” (Scott Menzel, We Live Entertainment).

The Collection of Main Characters – A look at all the main players and how they fit in the universe created by filmmaker M. Night Shyamalan.

The Rest of the Family

Bringing the Team Back Together – M. Night Shyamalan is famous for working with many of the same crew from film to film. In this piece, cast and crew share personal stories of why Shyamalan’s productions feel like seeing family again.

David Dunn vs. The Beast – An in-depth look at the animalistic face-off between David Dunn and The Beast

Glass Decoded – M. Night Shyamalan unveils some secrets of continuity and style from across the Glass trilogy

Breaking Glass: The Stunts – The superhuman strength of The Beast is best illustrated in the stunts. Take a behind the scenes look into the very effective methods of executing stunts in the film.

Connecting the Glass Universe – Explore M. Night Shyamalan’s stylistic approach to the Glass trilogy and the unconventional concept of a comic book movie grounded in reality.

The Sound of Glass – Composer West Dylan Thordson elaborates on his use of string instruments to create tension, and explains why recording the score on-location enhanced the tone of Glass.

Enhancing the Spectacle – The VFX team provides details on the rewarding task of using CGI as an effective tool to intensify the narrative of Glass.

Night Vision – A look at the early stages of Glass by examining the storyboards and their remarkable similarity to the final shots in the film.

I am not sure I’m remembering this correctly, but I think Shyamalan has done this before: One Flew Over the Cuckoo’s Nest is one of my favorite films of all time. Blatantly steal from it […]

Just in time for Christmas comes this great news for all M. Night fans that have made the jump to Hi-Def (unlike myself): Unbreakable is coming to Blu-ray Disc on April 1, 2008!  Here’s the […]