Earlier this year, the president of The Pennsylvania Society, James Nevels announced that Mr. Shyamalan is the 2012 recipient of the society’s Gold Medal for Distinguished Achievement. The Gold Medal is given every year to a prominent person in recognition of citizenship; leadership and contributions to the arts, education, science and industry.

Yesterday, Mrs. Pamela Dent, wife of Congressman, Charlie Dent of Pennsylvania informed us that they both along with their 12 year old son, Jack Dent were present at The Pennsylvania Society’s 114th annual dinner, which was held on Saturday, December 8th, 2012 at the Waldorf Astoria. 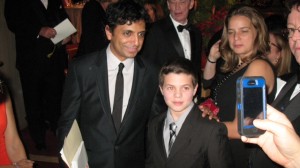 Congressman, Charlie Dent and his son, Jack Dent attended this prestigious event and honored, Mr. Shyamalan for his contributions to the state of Pennsylvania and they were kind enough to also share with us a picture (see above) of their son, Jack with Mr. Shyamalan at the event. We, at Mnightfans, are also thrilled to see that Mr. Shyamalan was honored with a Gold Medal for his contribution to  his State. We would like to thank Congressman, Charlie Dent, his wife, Pamela Dent and their son, Jack Dent, not only for sharing this great news with us, but honoring our favorite film-maker as well.

Shyamalan is a Philadelphia native and a resident of the area, was honored with the award for his achievements in writing, directing, producing and acting in American films often set in and around Philadelphia and for his philanthropy. Having written and directed a dozen films, Shyamalan’s most popular work was his 1999 film “The Sixth Sense,” featuring Bruce Willis and Haley Joel Osment, which was nominated for six Academy Awards.

M.Night Shyamalan’s After Earth is still more than a year away and to keep ourselves occupied and our readers entertained, we’ve been focusing on the production of the film from the beginning. If you happened […]

A movie’s music is one of its most important aspects; a characteristic that is often taken for granted.  A film can reveal so much within its music.  Beyond the creepy background music of thrillers that tells […]