“The Sixth Sense” director M. Night Shyamalan has a pretty good track record for launching child stars in his thrillers, but “The Last Airbender” (which bows next July) posed a special challenge since it was based on Nickelodeon’s popular “Avatar” cartoon.

“Typically I’ll find the actor and then mold the part to fit the child, but this was a pre-existing character, and I had to hope that this person existed,” Shyamalan tells Variety.

After conducting a yearlong worldwide search for a young martial artist to play Aang, the director came across a video from Dallas-based 12-year-old Noah Ringer, who’d heard about Paramount’s open audition call through his tae kwon do club.

Touting a first-degree black belt and a proficiency with various Eastern weapons, Ringer not only bore an uncanny resemblance to Aang (complete with shaved head) but also impressed Shyamalan with his sincere gentleness — a characteristic the director felt was essential to play a monk who brings balance to a warring world.

“Night wanted me to be natural,” says Ringer whose first stab at acting came when prepping for the audition. “He didn’t want me to be Aang; rather, he wanted Aang to be me.” 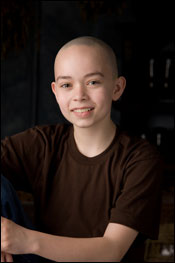 iF MAGAZINE: What was the plan with this film and what were you trying to achieve, to re-invent yourself? M. NIGHT SHYAMALAN: I have always wanted to develop a long mythology based franchise like THE […]

Paramount Pictures and Nick Movies have launched TheLastAirbenderCasting.com, an official site dedicated to finding the cast for the live-action motion picture The Last Airbender.