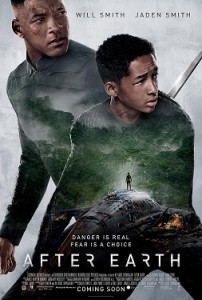 Whenever Shyamalan has a new film playing in the theaters the critics and the majority of their followers get ready to hammer the film-maker and his work. And what’s even more repulsive is that they focus on the film-maker and intentionally they pay less attention on the film itself. More on why they should not do that and why I refer to his critics as Scrunts, please read here.

It’s been an interesting year in films so far. – On and off, it’s been impressive; I have some favorites of my own and few, sadly, that are not falling in the “favorites” category. – Shyamalan’s After Earth, despite some of its weaknesses, falls in a charming manner in the ‘favorites’ category. It’s a surprise and can also be called a beautiful work in its own right. In other words, After Earth has managed to stay in my list and I can proudly say that it’s a good film with an interesting plot. Now before I go further, please understand that I am not praising the film, for this piece is written for MNightfans. – There are few reasons I believe After Earth is a good film; actually a better picture than some of the blockbusters of this year.

I would like to put the spotlight on the originality and also on Shyamalan’s method a little bit. Shyamalan still, audaciously, steps forward as an artist with a sense of originality, whereas some film-makers don’t. I consider his methods smart as much as daring. And it boggles the mind as some don’t see it. Shyamalan’s work in Hollywood is against the current paradigm. – Some of the contemporary film-makers, yes, they’re talented, but what they seek is to jump right on the opportunity to take on reboots and sequels so they can get their names labeled forever on a famous franchise. And when it comes to Shyamalan, he likes to stay in the corner, and from time to time, he throws a new spear right at a system that many are so used to.

After Earth, interestingly puts its spiritual journey within the science fiction genre. Shyamalan still, as an old-fashioned auteur, manages to create a sense of tension. The atmosphere that we find Kitai (Jaden Smith) and his father Cypher Raige (Will Smith) turns the skin cold. Shyamalan injects that one famous sense, which is known as fear, through his eerie long shots. Often, in silence, we see the character on the screen introducing through their expression, of course, wordlessly, paranoia. And we, as audience, sense the impact of being hopeless. But, Kitai as a newbie manages to beat the odds. On screen and off screen, we hear Cypher guiding his son through a world that is no longer accepting mankind. 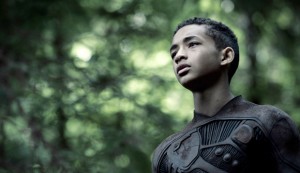 It takes faith to make a Shyamalan type of film. To see and feel the senses of his characters; Cypher as a protective father understands the reality of the situation that he is in. He has no choice, but to guide his son through a world that is full of danger, where possibility of death is certain. After Earth manages to pull itself out with the help of its characters, dialogues, and Shyamalan’s techniques and most importantly with the help of its unique atmosphere.

The film, like I said, comes with some obvious weaknesses as well. And one of them is its opening shot, which I think has been executed in a rush manner. It gives audiences no choice to feel captivated with the world that Gary White has written. Though, the film emotionally grabs you once both Cypher and Kitai’s ship crash lands on Earth. – One of the other weaknesses of the film is its 100 minute duration on the screen. I think what’s necessary is that all film-makers before filming should find a pace. This brings to mind again that Shyamalan as a director does pretty well when he works on his own product. When it comes to pacing, and looking back at Shyamalan’s previous films, I don’t find any issues with the pacing of any of his films or with the opening shots. They are always engaging: The Sixth Sense, Unbreakable, Signs, The Village, Lady in the Water and The Happening.

I have said this before and I think it’s the first time I am penning what I have said that Shyamalan works even more effectively as a film-maker when he has complete artistic freedom. It’s one of the reasons, I want him to step back where he had started from. He understands his own methods; he is the mechanic of his own workshop. Like many other fans, I’m looking forward to his next film; a screenplay that he’s currently working on, which I think is going to be a low budget film. That sounds interesting to me.

Even with some of its weaknesses and not so impressive CGI, After Earth still, in my book, manages to pull itself up in the list. After Earth can be pronounced as a good film and what saves it is Shyamalan himself. It’s always interesting to view his work and in After Earth, we do see his methods of film-making. The techniques that he’s so much in love with are all quite visible and understandable if seen a little more closely.

After Earth will be released in Blu-ray/DVD on October 8, 2013. Pre-order yours now.