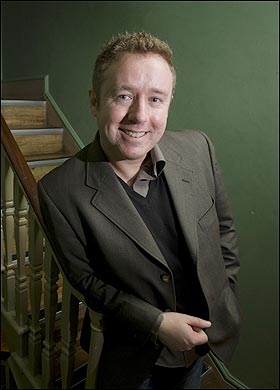 Posted by Mark Millar on the Authority board: “I watched Superman 2 again the other day for the first time in something like ten years. It’s one of the better comic-book movies and it was still awful. I was embarrassed sitting watching it with my wife and cringing at every awful line. Hollywood throws a bucket of cash at these concepts we’re all into so much, but the execution is always such an insult to the viewer. Batman, Phantom, Shadow, etc, are all cheesy at best and horrible at worst. That’s why UNBREAKABLE was so refreshing. It’s the first superhero movie where the writer, producer and director (same guy) hasn’t been taking the p*ss.

Grant Morrison and I went to see it yesterday and we spent two hours talking about it outside the cinema. He called me this morning and we spent another two hours talking about it on the phone. I can’t possibly recommend the clever, intelligent build-up enough and I’m astonished that they managed to pull this off on what looks like zero budget. This is the best superhero/ sci-fi film I’ve ever seen and it could have been shot for Channel 4 or BBC1. There wasn’t ONE special effect.

However, what REALLY made the film for me was something which occurred to me this morning. I realized, just before Grant called, that the biggest twist of all (and the overt twist is a good one) is the best twist I’ve ever seen in a movie. The big twist is the one which sunk in the following day and I’m going to say it here so…

But David Dunn wasn’t superhuman. He was just an ordinary guy and the genius of what this plot did was make us think he was a superman without actually showing him do anything. Elijah just managed to convince DD and maybe even HIMSELF that Dunn was a superhuman, but the giveway line that it was all just a massive psychosis was the ten second pause on Jackson when he said that the most terrible thing in life is not to know why you were put here.

Sure, the overt plot twist in the movie is that Jackson realized he was the first villain and he set out to find the first superhero, but the truth is that he didn’t find him. He just found a lucky guy (through probability) who managed to escape unhurt from one of a thousand people killed in accidents he instigated. David Dunn, as we saw at the start, was at such a low ebb that he was willing to believe ANYTHING which might give him an excuse for the crappy life he was leading. Being a superhero brought his wife and son back, after all.

Don’t think Dunn was fooling himself? What about all the set-pieces where you expected something SUPER to happen? The kid never fired the gun at his chest to test him. Big, fit security guards might just manage the three hundred and fifty pounds he RECKONED he was lifting. He and his wife were only seventy five per cent sure he’d never had a cold. And the whole incident with him almost drowing as a kid? We saw that Elijah was suicidal after this loop-hole in his argument until, like a nut, he came up with the WATER as KRYPTONITE theory.

Of course, the water did almost drown him at the end– but only because he couldn’t swim. And think about the fight with the serial killer guy? Did David Dunn do anything in terms of strength that the REST of us couldn’t do? Even the car accident he had as a teenager– did you see the way the frame froze when the other driver asked if he was hurt? We never got an answer.

The only power he seemed to have was a second-sight when it came to dodgy people. But isn’t this what made him a good security guard? He guessed right a couple of times, but even this was more instinct than power. Think about the scene included where he tries to bust the drug-dealer. The director cast himself in the part because it was so pivotal. It showed us that Dunn wasn’t psychic– he just had good instincts, but that he was fallible as the rest of us.

All in all, an absolutely brilliant film. The best superhero movie ever made and not a single cape or even Richard Pryor. If you haven’t seen this and you read these spoilers anyway, I urge you to go now– if only for the classiest comic store in existence. When will MY local store get an in-house pianist playing classical music.”