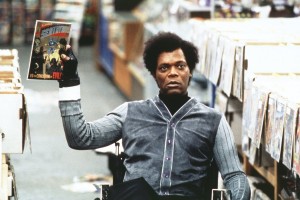 Of course, there is the fact that Elijah is the polar opposite of David – David is unbreakable while Elijah is extremely breakable. Many superheroes and their villains are “opposites.” To better emphasize that point, the first three times we see Elijah in the film, we see him in a glass reflection. Obviously, this is to signify his “breakable” condition.

In the opening scene of the film in 1961, the first shot, we see the infant Elijah in the reflection of the dressing room mirror.

The next time we see Elijah he is a 13 year-old child in 1974. We see his reflection in the television set.

Finally, we see Elijah in the reflection of the vintage comic art piece in his store, “Limited Edition” as he describes the characteristics of the piece to a not so potential buyer.

Elijah’s hair is big and combed funky to make his head appear as though it were proportionally larger than his body – something that Elijah himself states is a common characteristic among villains. His coats and wardrobe often make his body appear slender to accentuate this feature even more.

Elijah’s eyes. Just as his mother stated, villains are often depicted with larger than normal eyes. And Samuel L. Jackson has some big eyes.

In a lot of scenes, when we are looking through Elijah’s point of view, the camera sometimes gives us an upside down shot. It does this both times when Elijah has a comic book in his lap. This could possibly represent Elijah’s “scewed perspective on the world,” as his mother stated.

He carries a cane. We see this with many “evil” type characters.

His car. If that’s not a villain’s car, I don’t know what is.