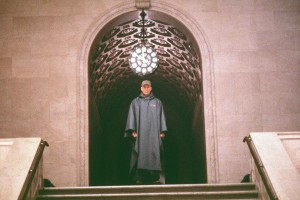 First of all, the name itself – David Dunne – shares a likeliness to many comic book superheroes in that the first letters of his first and last name are the same. We see this trend in such comic names as Peter Parker (Spider-Man), Bruce Banner (The Hulk), Scott Summer (Cyclops), Clark Kent (Superman (I know, but the letters sound the same), and many other characters in the world of comics.

Of course, the fact that he’s the only survivor of the train wreck, with not so much as a scratch on him, is another clue that David is not an ordinary man.

As stated by Elijah in the film, David may have chosen the occupation as a security guard because he has a knack for protecting people – just as any super hero does.

In the scene just before David and Audrey go on a date, Joseph is playing with a GREEN and YELLOW action figure superhero. Since those seem to be David’s “colors,” this is another allusion to Daivd being a real life superhero.

Elijah mentions to David over the answering machine that water is like David’s Kryptonite. This is one of the first real clues that links him to his eventual super hero revelation, and more specifically, his parallels with Superman. Most superheroes have one significant weekness, and David’s is water. But as we all know, he even overcomes that obstacle.

After the two girls rescue David from drowning in the pool, there is a low angle shot right behind David’s feet that cuts off just below his knees. His draping dark green poncho reminds us of Superman’s cape. This is a familiar shot that is reminiscent of and featured in many Superman comics and movies.

Upon arriving home after his battle with the man in the orange jumpsuit, David hangs his security guard “uniform” up in his closet just as any other super hero would do, such as Superman or Batman.

In the next scene, David is carrying his wife Audrey up the stairs to his room. We never actually see David’s feet or the lower half of his body. It almost appears as though he’s slowly flying or ascending upwards. This could possibly be an ode to Superman carrying Lois Lane as he flies.

In the newspaper article on the front page the next morning, the drawing of the mysterious hooded figure looks very much like a comic book drawing or figure. This almost finalizes the fact that Dunne is a real life superhero. The drawing even depicts the square jaw common to most superheroes.

At one point, Audrey asks David if he’s knowingly keeping her and their son at a distance. This is something that superheros tend to do, to keep their families safe.