In just about a week or two  Shyamalan will roll the cameras to shoot After Earth. For the past few months he’s been occupied with the casting of the film, location scoutings, and recently finished rehearsal sessions with Will Smith and Jaden Smith. Previously via Twitter Shyamalan stated that the tone and atmoshphere of After Earth’s story will be close to Ridley Scott’s 1979 sci-fi epic Alien.

And again just recently via Twitter Shyamalan shared a very interesting picture, which you can see below. It’s slightly giving us the idea behind the art of the film’s title design if you look at M.Night Shyamalan’s name. 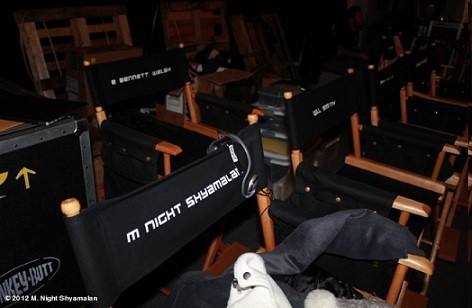 Update: Via his google+ profile Gary Whitta has revealed that this week  the cast of the film is heading to Costa Rica to begin filming. Then onto Philadelphia, Utah, and Northern California.

On April 19, 2011, DIRECTV launched its much-discussed premium video-on-demand service. A service that offers customers to watch newly released movies only after 2 months they hit the theaters for the price of $29.95. Recent […]

Folks at The Wrap has just learned that Shyamalan’s upcoming micro-budget film titled Sundowning stars rising child star Ed Oxenbould and actress Kathryn Hahn. According to the report, Hahn is portraying the role of a […]