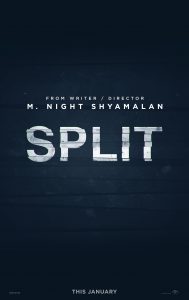 M. Night Shyamalan’s Split has come in at number one in its’ first weekend at the box office. It cost somewhere around $10 million to produce, and estimates have it making about $40.18 million in just the domestic box office. Split could be Night’s first $100 million film since 2010’s The Last Airbender.

Split also opened to $5.8 million internationally, in about 20 markets, with another 40 markets to go in the next few months.

Have you seen Split yet?

Spencer Clark and Charlayne Woodard are Back!

September 21, 2017 Rohan Glass, Split, Unbreakable Comments Off on Spencer Clark and Charlayne Woodard are Back!

As cameras are ready to roll in Philadelphia soon, Shyamalan and team are still busy gathering their actors to join the rest of the cast members like Bruce Willis, Samuel L. Jackson, James McAvoy, Anya […]

M. Night Shyamalan is back with another thriller! This one features James McAvoy in a role requiring him to take on a person that has, according to the poster above, 24 personalities. If you’ve seen […]

Early this year we shared analysis on The Village and The Sixth Sense (here) written by Mr. Dag Sødtholt, a Norwegian film critic, revealing an attention to the detail and reverence for cinema, and work […]