With the Comic-Con Panel ended this past Saturday, we didn’t only get to read the interesting concept behind the film, its comics or novel, we were also treated with a sapid viral video released not too long ago via After Earth official website. But, one thing we didn’t get to see is a concept art from the film. Perhaps this time they wanted to be different than the Las Vegas Licensing Expo which was held in June. What we got from the Comic-Con, besides the comics and novel that are in the works, is a look at the costume from the film, standing behind a glass with a spear, which is a bit similar to what Jaden Smith was wearing in the picture that was released earlier this year during their shoot in Costa Rica. 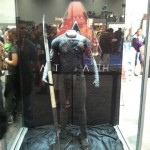 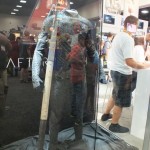 What’s interesting about these battle suits is that they are not only designed to keep someone warm, and protect the skin against the acidic rivers, sea and rain, these battle suits are composed of “Smart fabric” that has multiple uses and can change shape with ease. This is something totally different for Shyamalan, something far more dark in tone and atmosphere. This is the type of atmosphere where Shyamalan’s mind belong; we have seen his work before in Signs (2002), Unbreakable (2000), I believe it is safe to say that we should be ready for what’s coming June 7, 2013.

Here we have a report from Philly.com on M. Night Shyamalan’s next film.  It’s getting very exciting!

See M. Night walk the Carpet at the Lady in the Water Premiere

Courtney, from Warner Brothers, passed this information along to us, so that we could bring this to you: We are having the premiere of Lady in the Water in NY on Monday, July 17th at […]

The L.A. Times recently featured an article about the upcoming book “The Man Who Heard Voices” in which among other things, tells Shymalan’s side of the break-up with Disney. The article reveals parts of the book in […]