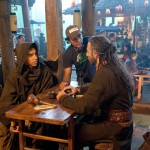 Vulture is one of the many blogs that had the opportunity of interviewing M. Night Shyamalan about The Last Airbender.  I like how frankly Night speaks about things.  He talks here about the reviews that he hasn’t read yet, as well as the films’ runtime and film as an art form that is subjective to the viewer.

Airbender‘s running time is only 104 minutes, which isn’t very long considering that it’s an adaptation of the twenty-episode first season of the cartoon. Was it hard to pack everything in there?
I’m dying to make a two-hour movie, I just haven’t earned it yet. I’m really tough in cutting and I have a style that creates a certain pace, and a way of writing where I try to get nuances in one scene that help other scenes; it creates a very similar pacing in every movie. Sixth Sense, Unbreakable, Signs, and I believe The Village were all the exact same length. So it’s very bizarre. I guess also when I’m constructing the story in the script form, it must be that there’s just an inherent kind of “I need to be at this place in the story” driving me. So maybe that’s where it’s coming from.

Have you read the reviews for Last Airbender?
No, I haven’t.

Well, are you aware of the reviews?
No, actually.

Well, for the most part, critics have not been kind. Are you just ignoring them? Will you read them this weekend? Have you just not had time?
Are you saying that in general they didn’t dig it?

In general, no. Roger Ebert, who liked The Happening, did not. The first line of his review is, “The Last Airbender is an agonizing experience in every category that I can think of and others still waiting to be invented.” How do you react to something like that?
I don’t know what to say to that stuff. I bring as much integrity to the table as humanly possible. It must be a language thing, in terms of a particular accent, a storytelling accent. I can only see it this certain way and I don’t know how to think in another language. I think these are exactly the visions that are in my head, so I don’t know how to adjust it without being me. It would be like asking a painter to change to a completely different style. I don’t know.

Critics haven’t been kind to your last couple of films. Do you still worry about reviews?
I think of it as an art form. So it’s something I approach as sort of immovable integrity within each of the stages. So if you walk through the process with me, there’s not a moment where I won’t treat with great respect. So it’s sacred to me, the whole process of making a movie. I would hope that some people see that I approach this field with that kind of respect, and that it’s not a job.

Were you trying to please critics with this film? Did you have an audience in mind while you were making it?
For everybody, actually. It’s just a very cool, spiritual, action-y, family film — a family adventure.

Do you know what your next movie will be?
I don’t know right now. I’m still trying to figure it all out, excited about a little bit not knowing. Just seeing how the world lays out for the next couple of years. There’ll be a lot of exciting things, I’m sure.

Read the rest at Vulture

Christopher Nolan, director of Batman Begins, The Prestige, The Dark Knight and the upcoming Inception gave M. Night Shyamalan some advice when they met.  It was very simple, but very helpful to the process.  Makes […]

M.Night Shyamalan: ‘My Critics Will Never Be Happy’

This evening (June 10th) @ 11:30 ET/PT, Mark Wahlberg will make an appearance on CBS’s Late Show with David Letterman. Wahlberg will talk with the legendary late-night talk show host about his new film The […]