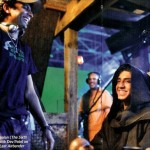 30 Ninjas had an opportunity to interview M. Night Shyamalan about his experiences directing The Last Airbender.  Here’s a portion of the first part.

JULINA TATLOCK: The Last Airbender has major elements in it that a lot of your other films don’t have: huge action fighting sequences and the big use of special effects. Was there anything about specifically the fighting and the action or the CGI that you were either concerned or particularly excited about?

M. NIGHT SHYAMALAN: Well, the fighting part of it was something I was really excited about, because I’ve been studying martial arts on and off for eight or nine years and probably, if somebody broke into my house or something, I would run like a schoolgirl, but I theoretically have been training for that moment for quite a while.

JULINA: [laughs] I study taekwondo, and the more I practice it the more I think my only winning fighting strategy would be: “Hit really hard and run as fast as I can.”

NIGHT: [laughs] Exactly. I’d like to believe that my mind would stay clear and all the training would just flow, but I’m not sure that would be the case. [laughs] But yeah, out of the applications you mentioned [fighting sequences and CGI], all of that is an understanding of the physics of fighting, and being able to apply that for the first time, really, in an acute way, was really exciting for me. I got to work with the choreographers in a real specific way, you know? If I was a dancer and I was choreographing a musical with the choreographer, it would be a similar relationship. I could say: “I’m not buying the stands on that punch; I’m not buying why you would do such a roundhouse at that moment.” All of those things, and the language, and I would talk to the two fight choreographers before, in the first days, and say: This [fighting] is dialogue, and the dialogue can’t be: “I hate you, you hate me. I hate you, you hate me,” you know? That’s not dialogue. [laughs] It’s got to be: “I don’t wanna fight you, please don’t make me fight you, please stop, I don’t wanna do this to you, OK, you’ve given me no choice.” That needs to be in one fight — that “conversation” that you’ve added to the fighting — and we would work through each fight sequence with, What’s the dialogue? What are they both saying to each other [through their body language]? Where there’s a change, who’s affecting who? And then we had the added one-of-a-kind choreography that this movie is forms against other forms … For people that aren’t familiar with martial arts, the form is where you learn particular techniques or you learn each belt. Or in Kempo, which I studied, there are different forms you learn for each belt and they teach you different movements and different stances and different katas [forms] for different purposes. It’s like tai chi — one of the four nations [in Airbender] is based off of tai chi, so there’s a lot of tai chi in the movie. There’s a lot of poetry in the martial arts. Let’s say, hypothetically, there’s a movie that my wife might not be into, but one that I would love — this [movie, Airbender,] is something that would speak to her because she would understand the emotion and the physics behind it, because we really spent time on that. It speaks to the beauty of what it’s like to control your body.

But the CGI part of it definitely scared me to death. It was something I had to learn, and really I felt like to be a “big boy” I had to learn this as part of my storytelling. [laughs] I felt like Mr. Spielberg, Mr. Lucas, Mr. Jackson and all these people were just naturals at it, and this was my training ground — just like if you want to play professional basketball you gotta learn to do [certain] types of moves. I definitely, probably, put everyone through the wringer as I was learning on the job, but I feel much more confident now where if I were given the opportunity to make parts two and three of this franchise I would love to continue the education.

JULINA: It was baptism by earth, air, fire and water!

Read the rest at 30 Ninjas!

I’ve been called a lot of things on this site before, but an idiot was never one of them.  Granted, I’ve never witnessed the amount of anger that I have seen here.  And I’m a […]

We’ve got a report from NJ.com about a small antique store that became a treasure trove to the set designer for The Happening.

M. Night Shyamalan: “I prepare the tea, but it is sold as Coke”

The marketing efforts for all of Night’s films have been interesting.  He used to control most aspects of the publicity, and the audience had a good idea of what they were going to see. Here’s […]