To paraphrase the iconic line from filmmaker M. Night Shyamalan’s “The Sixth Sense”: “I see movie people.” The people whom the young Haley Joel Osment saw in Shyamalan’s breakthrough 1999 film were, of course, dead.

But the movie people are alive and well and plan to begin filming Shyamalan’s “The Last Airbender” in the Reading area beginning Thursday, weather permitting. Most of the work for the Paramount picture this week will take place at the Pagoda on Mount Penn, following the company’s return Monday after 15 days in Greenland.

Production designers and special-effects crews have been working for several weeks to prepare the local site for the film, which is set in a series of mythical nations – Air, Water, Earth and Fire – and is based on the Nickelodeon animated TV series of the same name. 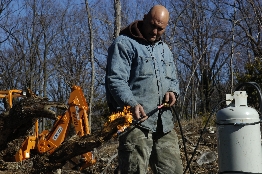 [Reading Eagle for the rest]

Reader David Blaise wrote in with a video he shot for his clients, which is why it has a lot of references to the economy.  (Gotta love the self-promotion!)  He also slaughters M. Night’s last name (no flaming please!), which isn’t hard to do if you don’t say it as often as we do around here.  The part of the video you’re looking for is near the last minute and a half:

People who want an early read on what could emerge as the next big entertainment business trend should keep an eye on what their kids do Friday night at 8:30 ET. Viacom’s betting that millions […]

Rope of Silicon: The M. Night Shyamalan Interview You Want to Read

Rope of Silicon’s Brad Brevet had the distinct pleasure of interviewing M. Night Shyamalan.  He wrote us to invite all of you to read this interview.  It is a fascinating interview, and really gets to […]

We’ve got a report from NJ.com about a small antique store that became a treasure trove to the set designer for The Happening.