As the cameras began rolling director Shyamalan called action at Will Smith and his son, Jaden in Humboldt Redwoods State Park; Mr. Shyamalan for years had the plan to make a film with Will Smith.  The busy men decided to wait a little longer though, but for the right reasons.  Will wanted to collaborate with Shyamalan on a special project. As the years past, finally they got to sign the dotted lines on a paper with the heading in bold text that read, After Earth. As the cameras rolled in silence under a gray sky in Redwoods State Park after wrapping Philadelphia and before that Costa Rica, Shyamalan’s brows remained furrowed focusing on his artistic vision.

On the 58th day, which was Tuesday, May 2nd, the crew stopped the cameras and commenced packing their belongings. After Earth represents a belief, says Shyamalan that as an artist sometimes you have to be raw and exposed. The film tells the story of a father (Will Smith) and son (Jaden Smith) whose ship crash lands on earth, one thousand years after it has been abandoned by mankind. The script was originally written by Gary Whitta (The Book of Eli), rewritten by Shyamalan and finally polished by Stephen Gaghan (Traffic) in late 2011, and also by The Hurt Locker scribe, Mark Boal. 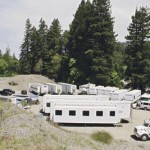 Times-Standard was invited to the ‘After Earth’ base camp, a state-of-the-art tent city that bloomed and disappeared on a small gravel bar off of Dyerville Loop Road in less than two weeks.  The production camp, hidden from roads and well-guarded, was the staging ground and feeding area for the more than 400 people who had been working since last Monday on the science fiction film. The camp was a miniature city of hyper-concentrated activity, with dozens of gleaming white semi-trailers, trucks and vans. The center of the camp is a large kitchen and cafeteria where — as the crew broke for a 30-minute lunch break — hundreds of people gathered to eat salmon steaks, chicken, ribs and a variety of salads and desserts. Even California Highway Patrol officers and State Park Rangers joined in on the meal. Executive Producer Bennett Walsh sat in his clean, quiet trailer to talk about why the film chose Humboldt County.

”I think the parks have been phenomenal — because they’re a character in the film,” Walsh said. “The director, Will — they love what they’ve been getting here.”

Walsh, whose credits include the “Kill Bill” films and “The Kite Runner,” doesn’t stick out in Humboldt County with his shoulder-length hair and calm demeanor. He leaned back in his chair as he talked about traveling around the world making movies. “This is definitely one of the top locations.”

Walsh said the film’s production designer had a distinct vision, a “smashup” of the North Coast’s redwoods and the rainforest of Costa Rica, where the crew filmed earlier this year. Extensive scouting in Humboldt and Del Norte counties left a difficult choice, but the filmmakers eventually decided on Humboldt Redwoods State Park because the groves were less dense than others found in Redwood National Park.

The crew in their off hours enjoyed local entertainment and food, sharing notes about their favorite restaurants in the county. Walsh didn’t divulge any specifics on the project’s budget, but the sprawling base camp, meals and transportation — not to mention a $60 per diem for the 400-member crew, according to Walsh — indicated that it was no small sum.

On the sets of his films, if Shyamalan’s eyes are on his actors, his attention is also on the crew walking around making sure that everyone is in the circle. Every detail was covered from a steady stream of shuttles between set and base camp to small flags placed around every poison oak plant. Walsh said that the county’s experience with filmmaking influenced the decision to film in Redwoods State Park. Every place we’re going to, we’re going for the look, says Walsh. You also have to have the infrastructure. We soak up a lot of resources. We roll in like a storm.

Now some of the crew members are in search of a different land. Shyamalan is going to shoot the film in Utah for 6 days; few members are already in the region scouting locations while rest of the crew will take rest for 3 weeks. According to Shyamalan, editing will begin from Monday 5/7/2012.

It was a Fresh Prince reunion with Will Smith, DJ Jazzy Jeff and Carlton on the Graham Norton Show!  Enjoy!

Have a question for Night about THE LAST AIRBENDER that you want an answer to?  Well, LastAirbenderFans.com’s Nightbender has been invited to a roundtable discussion with Night, and wants your questions submitted so that he […]